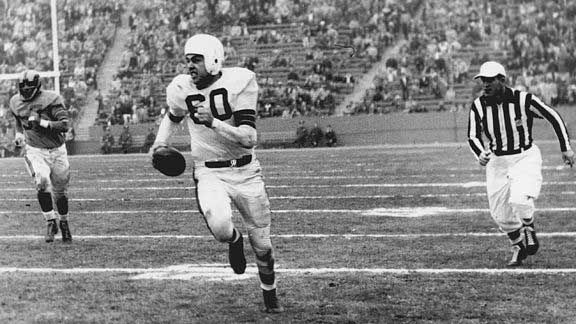 You may not know this but I am not a fan of the NFL Draft. Never have been, probably never will be. With the exception of some notable draft analysts and NFL personnel, this type of year breeds folks talking about players they’ve rarely or never seen before. I don’t want to join the thundering herd.

Instead, we’re taking a hard left. We’re going to draft the greatest quarterback in each franchise’s history. Why? Well, this blog is primarily centered on quarterbacks. What did you expect? A focus on offensive guards?

One important thing to note…this will happen in the order of the 2018 NFL Draft. So, let’s get to it…and yes, I’m fully aware the Browns two picks in the top five. Don’t worry, we’ll cross that bridge when we get to it.

WITH THE FIRST PICK IN THE 2018 JMRA QUARTERBACK DRAFT, THE CLEVELAND BROWNS SELECT….

Why Graham Is The Pick: Cleveland’s history is littered with a ton of heartbreak courtesy of guys like Brian Sipe and Bernie Kosar. Those two were among the most prolific quarterbacks for Cleveland post-Graham. Each signalcallter brought the Browns to the playoffs but couldn’t close the deal when crunch time arrived or some otherworldly talent (aka John Elway) got in the way.

Graham experienced no such problems from the start of his storied career. Before the Browns joined the NFL, they were members of the All-America Football Conference. Graham dominated the AAFC including nabbing two MVP awards and winning four AAFC titles from 1946 to 1949.

Overall, Graham reached his league’s championship game IN EVERY SEASON he played professionally. Graham’s Browns won seven out of their 10 championship appearances with hiccup being a three-game title game losing streak from 1951 to 53.

Peak Graham: If you look at Graham’s AAFC and NFL numbers, you can see the competition got a bit harder once he landed in the NFL. He threw a league-high 24 interceptions in ’52. However, he still made it work, winning NFL MVP honors in ’51, ’53, and ’55.

His best statistical season in The Shield™ came in ’53. He led the league in completion percentage, yards, yards per attempt, yards per game, and passer rating. Incredibly, the Detroit Lions enjoyed the last laugh in ’53 by nipping the Browns in the NFL title game, 17-16. That game marked the final time Graham would lose a championship game.

Post-Graham: The Browns reached three NFL title games following Graham’s retirement following the ’55 season. Frank Ryan (some dude named Jim Brown) led the Browns to a league title in ’64. A season later, Green Bay snuffed out the defending champs for the NFL title. They haven’t reached an NFL championship game of some iteration since ’65.

Legacy In A Sentence: Over 60 years later, the Browns still haven’t reached a Super Bowl and haven’t quite found a suitable replacement for the greatest quarterback in its franchise history.