Kurt Warner Is A Hall of Famer…Period. 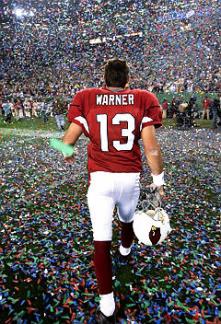 Kurt Warner is a Hall of Famer, period.  Hopefully this isn’t the last we’ve seen of Warner, but if it is…what a glorious ride it was. He wasn’t the number one overall pick in the draft or a quarterback with a pedigree from a BCS school. Instead, the Super Bowl XXXIV MVP proved once again at Super Bowl XLIII that he belongs in the immortal fraternity of the Pro Football Hall of Fame.

Surely, there will be a ton of debate about Warner’s merits and whether he should get into Canton one day. Yet, facing the league’s top defense on the game’s biggest stage Warner rescued a subpar performance with one of the greatest passing days in Super Bowl history.

Unfortunately because of Santonio Holmes’ game-winning catch, one of Warner’s lasting memories from the Super Bowl XLIII loss will be the ill-timed pick six by Steelers linebacker James Harrison that temporarily changed the momentum but served as one of the game’s most pivotal plays.

However, in a brilliant summation of his career, Warner survived and led the biggest comeback in Super Bowl history.  Yet, just like Super Bowl XXXVI against Tom Brady, his last stand fell just short.

Over the past few weeks, analysts and fans have examined the question of whether Kurt Warner should be in the Hall. To me, there is no argument. Warner joined John Elway, Jim Kelly, Terry Bradshaw, Troy Aikman, Tom Brady and Joe Montana as the only quarterbacks to start in at least three Super Bowls. All of the aforementioned gentlemen are in the Hall of Fame.

Here’s a numbers breakdown of how Warner’s playoff numbers stack up against his fellow three timers:

From a glance at these numbers, Warner is money in the bank come the postseason. That’s not the sole basis for Hall of Fame induction but it’s a pretty good start.

When it comes to whether Warner will make it, his regular season numbers are likely to be his greatest challenge. During his 11 season career, he played at least 11 games as a starter only five times. In the interim, he either was benched or injured in the other six seasons.

While one has to be extremely careful with glorifying the passer rating stat (Warner is fourth all-time behind Steve Young, Peyton Manning and Tony Romo),  his overall numbers under the circumstances merit some type of consideration. Unfortunately, from a comparison standpoint though, there aren’t a lot of guys who’ve had such a bizarre career arc which will make it a bit difficult to judge him against his contemporaries.

The only guy that comes to mind who had a career slightly similar to Warner in the last 20 years is Randall Cunningham. The former Eagles quarterback was one of the top QBs in the league from 1988 to 1990. Then, in ’91 he suffered a season ending knee injury and never returned to form as an Eagle.

Cunningham didn’t get another starting gig again until 1998 with the Minnesota Vikings when Brad Johnson broke his leg and the Vikings went  to the UNLV Runnin’ Rebel for help. After leading the team to a playoff win in ’97, Cunningham put together the best statistical season of his career.

He threw for nearly 4,000 yards and fired 34 touchdowns to just 10 interceptions. Much like Warner though, a great season ended with a rough postseason loss. The Vikings fell in overtime to the Falcons in the NFC title game and Cunningham never put together another season close to the ’98 campaign.

Even though he possessed other worldly talent, Cunningham’s body of work wasn’t big enough (much like Warner’s) and he failed during the postseason.

Where Warner and Cunningham split though is in two areas. Even Cunningham’s best years weren’t as powerful as Warner’s, who netted two MVP awards. Thus, his regular season work was better; and then Warner’s postseason credentials are as impressive as anyone in NFL history.

Will he be a first ballot guy? Absolutely not. Yet, Warner deserves strong consideration in subsequent years because even some of the all-time greats never reached that Warner did in his time as a starter. Also, he’s a handful of plays away from having three Super Bowl rings.

Whether the NFL fandom realizes it or not, Warner is one of the all-time greats and someday his bust belongs in Canton, Ohio.