We interrupt divisional playoff week news with some off the field fare from someone who knows a thing or two about playoff football. Back when he was roaming the sidelines and huddles of the National Football League, this blog paid tribute (or something in the general neighborhood) to […]

Tim Tebow has a new book coming out and believe it or not, there are some noteworthy details about his time with the New England Patriots.

The Philadelphia Eagles mauled the Indianapolis Colts on Sunday afternoon, 36-10, in front of a lively crowd at Lincoln Financial Field.

There Is Already An Eagles Tim Tebow Soft Pretzel

The Philly Pretzel Factory, which is a franchise throughout the Philadelphia/South Jersey area, has released a new pretzel in honor of new Eagles quarterback Tim Tebow. 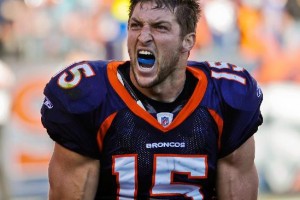 For Some Reason, Tim Tebow Works Out For The Eagles

Chip Kelly’s mission to troll Philadelphia Eagles fans and media continued on Monday as the team opted to give embattled quarterback Tim Tebow another shot at NFL glory by offering him a workout with the team. When we last saw Tebow in the NFL, he was a member […]

When we last heard from Tim Tebow, he was toiling in New England as a third-string quarterback behind Tom Brady and Ryan Mallet before being released prior to the start of the 2013 season.

From the “we knew we’d read this at some point during the summer” department, Tim Tebow’s first day at New England Patriots training camp was not a successful one.

Your Patriots Tebowing T-Shirts Are Available On eBay

It didn’t take long for folks to attempt to cash in on quarterback and inaccurate thrower supreme Tim Tebow joining the New England Patriots. Per Boston Magazine, a slew of Tim Tebow merchandise has found its way onto eBay just in time for your training camp needs.

Tim Tebow is a New England Patriot. Days after rumors swirled regarding whether Tebow’s time in the NFL was over, he will be at New England’s minicamp on Tuesday after reaching a deal with the Patriots on Monday.