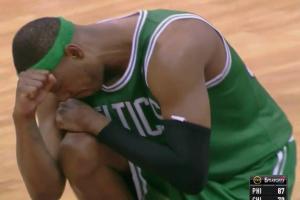 Who needs Rajon Rondo when the Celtics have Paul Pierce getting his Tebow on during Boston’s 87-80 win over the Atlanta Hawks in Game 2 of their first round series? Pierce scored 36 points in Tuesday’s night win and opted to hit a Tebowing stance after draining important […]

Song sung blue, everybody knows one. Sixers are down 3-0 to the Miami Heat in the first round of the NBA playoffs after a 100-94 loss tonight. This does not make my 87-year-old grandmother or myself very happy.

Video of the Day: When Hall & Oates Married The NBA

This weekend marked the opening of the NBA playoffs, which ultimately leads to numerous hours of productivity lost. While reading The Book of Basketball by Bill Simmons, he pointed out this Hall & Oates spot as one of the high points of NBA propaganda. I couldn’t agree more. […]

Video of the Day: LBJ

Kudos to Bill Simmons for unearthing this gem. On Friday night, everyone in Cleveland was ready to jump off a cliff until LBJ threw out the ultimate life preserver. This video details how it unfolded on Newschannel 5 in Ohio before and after The Shot Part II. One […]

Video of the Day: It’s Amazing

Kudos to the NBA for another sweet playoff campaign. This year’s focuses on “where will amazing happen next?’  The video below is mixed with Kanye West’s Amazing.