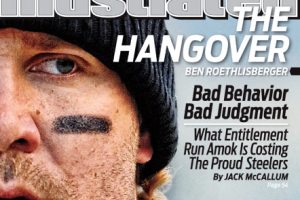 This is the cover of the new Sports Illustrated that will soon hit newsstands. It’s a polarizing and sobering look at Ben Roethlisberger.

The Return of Don’t Tase Me Bro: Phillies Fan Gets Tased

While standing in line for Turkey Hill Ice Cream at Monday night’s Phillies game, I kept hearing ovation after ovation after ovation. Nope, it wasn’t another Chase Utley home run. Instead, it was over a Phillies fan running onto the field at Citizens Bank Park. Ballpark security tasered […]

Video of the Day: Biz Markie!

Happy Monday all! It’s time for a good motivational video to get you ready for the week to come. Hey, you may not want to run through a brick wall after viewing this but at the very least it should put a smile on your face.