[picapp align=”left” wrap=”true” link=”term=LaDainian+Tomlinson&iid=9908251″ src=”http://view1.picapp.com/pictures.photo/image/9908251/new-york-jets-buffalo/new-york-jets-buffalo.jpg?size=500&imageId=9908251&#8243; width=”234″ height=”352″ /] During the offseason, the San Diego Chargers jettisoned the best running back in their franchise’s history. The Chargers decided to draft Ryan Mathews in April and it was widely assumed by many (including those fantasy football wizards) that he would […] 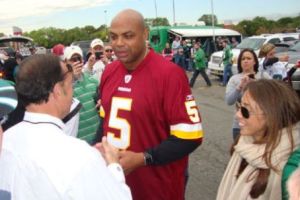 Charles Barkley made his way to Lincoln Financial Field on Sunday to watch Redskins and Eagles. As you can tell from the picture, he was not there to support the combo of Michael Vick and Kevin Kolb. Credit for this photo goes to The 700 Level.