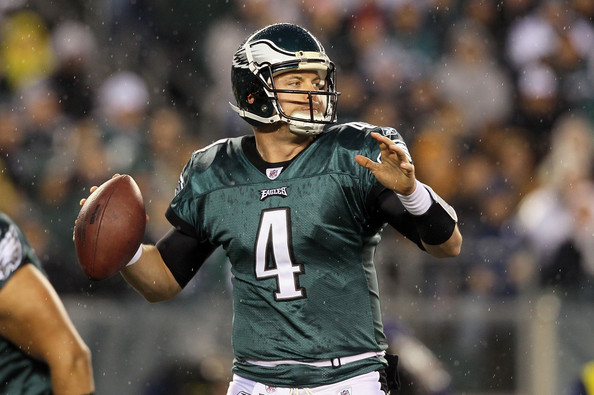 As a Philadelphia Eagles fan, I’ve watched Kevin Kolb and can truthfully say that his seven-game stretch as a starter taught me one valuable lesson: Andy Reid is one hell of a salesman.

The Arizona Cardinals decided to give Kolb a five-year, $63 million contract with $20 million as a part of a trade with the Eagles on Thursday.

After seven starts and posting a 4-3 record, the Packers signed Rodgers to a six-year, $65 million deal with $20 million guaranteed. Following the contract signing, Green Bay lost seven of their nine remaining games.

If the Rodgers template is the basis for Kolb’s contract in Arizona, it makes sense…sort of.

Here is a cumulative look at Rodgers and Kolb through the first seven starts of their careers:

The numbers are similar but Kolb’s performances had a greater level of volatility to them.

During Rodgers’ first seven starts, he compiled a passer rating of 100 or more in five games.

Conversely, Kolb had three like efforts but mustered a sub 80 quarterback rating four times over the same stretch including a dreadful three interception game versus Dallas to close the regular season.

The Kolb supporters would suggest he had a skeleton crew in the Dallas game (which he did) and he posted a pair of 300 yard passing games in his first two starts, which had never been done before in NFL history.

Yet, my biggest question mark about him is his ability to stand up to pressure and be a steady player. Too many times during his starting stint he appeared to be overwhelmed and made questionable decisions with the ball.

Following last season, Arizona had no choice but to bring in a quarterback but the price for Kolb is rather steep for a guy of his ilk.

As crazy as Kolb’s contract may appear, his is far from the recent standard bearer of high-risk contracts.

After starting just two games and completing 84 passes as an Atlanta Falcon, the Houston Texans decided to sign Matt Schaub to a six-year, $48 million contract with $7 million guaranteed.

The Texans have yet to appear in a playoff game in their franchise’s history but Schaub has proven to be a capable passer.

Making that type of contractual commitment is somewhat comparable to giving a rookie quarterback big money.

In this case, there is a good collection of tape on Kolb and I just don’t feel he is the guy to usher Arizona into the future and back to the playoffs based off of what I’ve seen.

Remember, if he was THAT good, he would still be an Eagle.