Lane Pryce Killed Himself Because Don Draper Is Back. 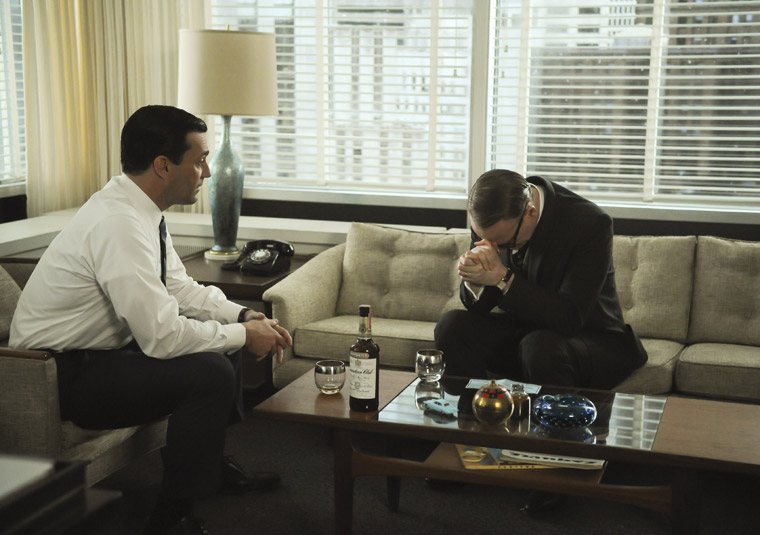 It took nearly an entire season but Don Draper appears to finally be rounding back into form as the leader of Sterling Cooper Draper .

Unfortunately, someone had to lose their life in order for this transformation to continue.

Upon finding out, instead of sweeping it under the rug, Don played the “good little boy” by pointing out Lane’s transgression and firing him on the spot.

Lane’s protest and overwhelming desire not to return to England because of his tax issues fell on deaf ears. Later days, dude.

For the remainder of the show, Pryce became a depressing mess. He entered Joan’s office and half-jokingly suggested a getaway with Joan. Then, fell back on good-old fashioned sexual harassment before she strongly suggested he leave her office.

After that awkward exchange, Lane’s wife presented him with a Jaguar…essentially a new symbol of the company that he would no longer be working for days later.

On cue, Lane snuck out of bed in the middle of the night to end it all in his latest toy. Since a Jaguar is so incompetent that one can’t be given the common courtesy of trying to kill themselves via carbon monoxide poisoning, Lane failed miserably.

For a brief moment, it appeared Lane would find a better way out of the situation besides offing himself.

By the way, does someone affiliated with “Mad Men” have something against Jaguar?

The viewing public’s general impression of Jaguar at this point is that their car is unreliable and their executives range between lecherous and creepy.

Anyhow, Lane REALLY didn’t want to go back to England. So, he wrote a resignation letter as Don suggested after the weekend’s conclusion and decided to hang himself in his office.

In some way, the suicide was a big giant middle finger to Don. Lane tried to kill himself in a Jaguar, the company’s signature car and then opted to do so at the office once the original plan failed. Instead of doing it quietly, Lane chose a passive-aggressive route.

The image of Lane hanging on the door will stick with Don, Roger, Pete, and many of those at SCDP for quite sometime.

Lane’s suicide manifested into another sign of the resurrection of workaholic Don Draper. While his colleague met a rather grisly conclusion, Don had to put his foot down instead of covering up Lane’s embezzlement attempt.

It appears that another sign of Don’s impending return to dominance lies at home.

The honeymoon stage of his marriage with Megan is definitely over especially since the “drown in champagne” speech from a few weeks back.

Long gone are the days of being on “love leave” or having angry sex with his wife on the floor of their home.

Draper appears set to make his wife and/or family a second priority again. He didn’t seem all that concerned that his daughter ran around New York City with some boy, failing to find out that Sally had her first period in the process.

Instead, when he arrived home to Megan, he was so flustered by the Lane incident that he ended up having a philosophical conversation with Sally’s friend Glen, which led to the youngster driving two hours back to school with Don riding shotgun.

The only thing missing to complete Don’s comeback is the cheating, carousing, booze hound that we’ve become accustomed to watching. We’ll see if the world – or Megan for that matter – is ready for a return to those days.

Thankfully, Don is beginning to hit 98 miles per hour on the radar gun again. He just needs to throw a few more strikes.