For Some Reason, The Browns Traded Trent Richardson To The Colts 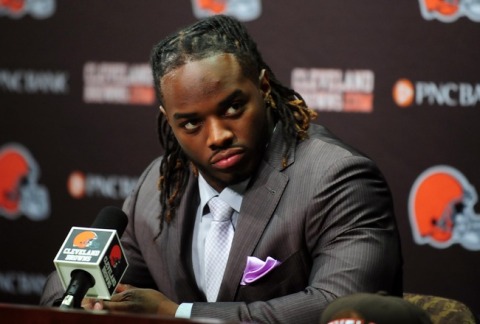 When Vick Ballard tore his ACL during a Week 1 win over the Raiders, it was reasonable to think that the Colts would comb the waiver wire for running backs.

Considering that market was dry as the martinis Roger Sterling gets sloshed on during Mad Men, it appeared the Colts would ride with veterans Ahmad Bradshaw and Donald Brown.

That was until today happened…

The Colts sent a 2014 first-round pick to the Cleveland Browns for running back Trent Richardson.

It’s a shocking move for Cleveland even though Richardson was drafted under a different regime.

Selected third overall in the 2012 NFL Draft, Richardson only mustered 105 yards on 31 carries in two games with the Browns in 2013.

(Insert sentence about this being a potential fantasy bonanza for the Colts here.)

Since the Colts figure to be a very competitive team in ’13, the logic behind this move is somewhat puzzling.

Indy’s win total could run anywhere from 7 to 11 games, which isn’t likely to land Cleveland anywhere near a top five pick in the 2014 draft.

Plus, it takes away one of the major pieces of Cleveland’s offense.

In other words, this is a potentially huge risk by Browns GM Mike Lombardi.

While this is shocking, Colts owner Jim Irsay warned us this would happen hours before the deal: