Video of the Day: Great Moments In Parade History

Yesterday in “Sixburgh”, the Steelers celebrated its sixth Vince Lombardi trophy with a parade featuring thousands of fans on hand. It takes me back to the definitive championship parade moment of 2008. Don’t believe me? Just ask Phillies second baseman Chase Utley…NSFW, obviously.

The 10 Coldest Games of All-Time: Part I

Days before the Arizona Cardinals nearly applied a death blow to Steeler Nation, the Pro Football Hall of Fame, in conjunction with Coors Light, released its list of the 10 coldest games in NFL history. A panel of some of the NFL’s all-time greatest players narrowed their selection […]

Video of the Day: The Boss Does NYC

After his rocking performance at Super Bowl XLIII, it’s only right that we honor Bruce Springsteen. Here he is from NYC a few years back doing Tenth Avenue Freeze Out. He is truly The Boss.

So, what does it say about the Super Bowl MVP, when he refers to the man the championship trophy is named after as “Dicky” Lombardi? According to the New York Post, Holmes referred to Vince Lombardi as “Dicky” Lombardi twice during a ceremony on Monday. Hopefully that mistake […]

This morning, one of the greatest Steelers ever is looking down and waving his Terrible Towel in celebration of the team’s sixth title. Take it away Myron Cope… 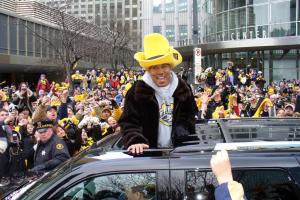 First off, congratulations goes out to the Steelers who were two minutes and change away from one of the biggest meltdown in Super Bowl history. All of their good fortune in the first three quarters (Harrison’s game-changing play, Terry “Pittsburgh” McAulay’s penalties, and Ben slipping away from Cardinal […]

9:10PM- Good to see that this game is spiraling out of control. Another Arizona penalty puts the Cardinals into a 3rd and 13 situation. Warner then proceeds to throw six yards short to Hightower, which is incomplete. Bad officiating, no deep balls. Great. Game ovvve…well not yet. 9:16PM- […]

8:35PM- Well, geez. Ending Arizona’s first drive was a ridiculous call by Terry McAulay, who seemed as if someone was asking him a Trigonometry question when he tried to make a call there. Warner clearly tried to throw the ball but McAulay says Steeler ball. It’s thankfully reversed […]

7:09PM- If you had Gary Russell not scoring in a prop bet…YOU LOSE! He goes in from one yard out. Well, can’t say that I’m all that surprised. When the Cards don’t force turnovers and aren’t playing Jake Delhomme they’ve been relatively ordinairy in the playoffs. They have […]

6:31PM- Gary Russell, who is a part of numerous prop bets, returns the opening kick and we’re off!! 6:43PM – Oooh. The Wiz challenges a Ben TD run and WINS! After running over the Cardinals D in the opening drive, a disappointing way to the cap the drive […]