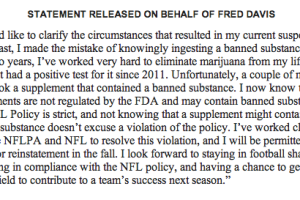 Fred Davis Is Not Having A Great Week; Busted For DUI Thursday

Redskins tight end Fred Davis was charged with DUI on Thursday, just one day removed from being indefinitely suspended by the NFL indefinitely for violating the league’s substance abuse policy. According to Mike Jones of the Washington Post, Davis was pulled over on Thursday afternoon in Fairfax County […]

If NFL power rankings were solely based on entertainment, the Dallas Cowboys would probably be the league’s best team. Once again on Sunday, the Cowboys were in the middle of another three-ring circus but this time managed to survive, defeating the Washington Redskins 24-23.

The NFL: Where Snow Happens

Sunday marked multiple games on the NFL schedule overrun by snowy conditions along the eastern corridor.

Robert Griffin III took time off from his rehab duties during the 4th of July weekend to marry Rebecca Liddicoat on Saturday in Denver…and release a video about his love of candy. Hours after tying the knot with Liddicoat, RGIII posted a rap video on Facebook featuring Mr. […] 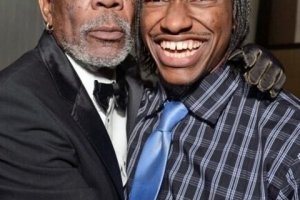 How can you not smile when seeing this picture of Robert Griffin III and Morgan Freeman?

RGIII Was Rather Emotional Over Louisville Beating Baylor Women’s Basketball

https://twitter.com/RGIII/status/318543559110307842 Washington Redskins quarterback (and proud Baylor alumnus) Robert Griffin III was hopping mad over Baylor’s shocking 82-81 loss to Louisville in the Sweet 16 of the NCAA women’s basketball tournament on Sunday night. Following the loss, which ended the career of the great Brittney Griner, Griffin took […]

The New RGIII Logo Is A Bit Mean

Too soon. The pistol offense did in RGIII, no need to rub salt in the wounds. Photo courtesy of Tom Brady’s Ego.