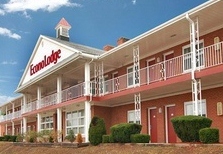 Depending on the given year, I’ll spend somewhere around 50 days a year on the road working and occasionally this requires hotel stays on my part.

I’ve stayed at a lot weird spots over the years; there was the seedy New Hampshire hotel that hosted a gun show in the middle of February on a Saturday morning; there was the time at a Vermont bed & breakfast resort when I wandered downstairs only to find some dude dressed like a circus ringmaster complete with top hat and long-tailed jacket.

As a whole, I love hotels. Soft pillows, good TVs, exercise rooms, and hella-soft mattresses are the best. I like almost every hotel I stay in…except one.

Last weekend, I worked with one of my college buddies in Williamsport, PA and since most of the town lacked a double bed accommodation or was sold out altogether, we were forced to stay at an Econo Lodge.

After arriving in Williamsport around 2:30am, I wasn’t up for a lot of chit-chat from the employee behind the desk. At that point of the night, I want to know three things:

In fairness to Mr. Blockbuster (that’s what I choose to call him since he was named after the company Blockbuster Video bought for $30 million back in the 80s…google it!); he was just doing his job.

However, when attempting to find answers to the aforementioned questions, I was spectacularly disappointed. Blockbuster informed us about the noon checkout (solid, we have to be at work by 11:30); breakfast (open until 10, which was slightly annoying but acceptable); and their lack of printer (it’s amazing that a national chain hotel doesn’t have a business center or printer considering humans require internet access nearly as much as eating and breathing at this point in civilized history).

Blockbuster’s breakfast tidbit managed to catch our attention most though. He made note of Econo Lodge’s famous waffles as a part of the spread.

Now to those unfamiliar with the hotel scene, many share a common setup when it comes to waffles. They use the same black, cast-iron griddle that guests can operate after scooping out prepared batter.

So, if there was something special about the waffles it was due to perhaps a special home brew of the batter.

My buddy and I theorized about what was so dynamic about the waffles. We arrived to the concept of Blockbuster doctoring the batter in some form.

I envisioned the dinner scene from Scary Movie 2 with Chris Elliot, playing some crazy-eyed butler who allowed his mangled hand to repeatedly touch the food until he coughed on it.

Thus, Starbucks it was for the following morning.

The fun didn’t stop there. Blockbuster, ever the loyal employee, asked me “you don’t plan on using the internet this late do you?”

Why yes Blockbuster, yes I do.

Clearly, Blockbuster needs to know his guests better and familiarize himself with my late-night sleeping habits that on occasion lead to 3am bedtimes.

Anyhow, after securing the appropriate internet log-in info, it was time to visit the true crown jewel of the Econo Lodge.

In Dennis Green speak, the Econo Lodge room was what we thought it would be.

The sheets smelled right down to the pillowcases and quite honestly, probably hadn’t been washed since 2009 Little League World Series. Nonetheless, I had some late-night note studying and searching You Tube for Irv Cross videos to do.

Meanwhile, my cohort navigated and suspected the bed as if Kathy Bates from Misery was underneath it, waiting to drop a sledgehammer on his unsuspecting feet.

I can’t blame him though. A black light inspection of the room would probably reveal unspeakable nastiness on the linens. We should have known to lower our expectations heading in though.

Recent reviews of the Williamsport Econo Lodge via Trip Advisor suggested this would happen:

It’s in a nice convenient location and it was a great value. HOWEVER, the blood stains on my husband’s pillow is the reason for my “1 star” review. When I checked out in the morning, the clerk’s response was “you could’ve called us for more pillows last night” — um and you guys could’ve made sure there weren’t blood stains on our pillows? Ew, yuck – won’t ever stay at another Econo Lodge as long as I live!!

Blood stain on the pillow? Nah. Maybe it was strawberry jam. Or maybe I’m too kind…

Dont stay during lil league series, they boost the price, $160. Both rooms and carpet are filthy. My room had a dry blood smear by the bathroom light switch. I asked staff to direct me to neareat laundrymat. She refused and said, we prefer you use our one machine. Whatta money hungry joke.

Well, then…you get the point.

The Econo Lodge is the exact reason I’d be a brutal entrepreneur. Unless I could possibly be the best at something, I’d never want my name attached to something so spectacularly mediocre.

It’s 2011 Econo Lodge. Clean up your act…and wash your sheets.

1. If the Houston Texans don’t win their opener against the Peyton Manning-less Colts, Gary Kubiak should present his resignation letter at midfield immediately following the game.

2. Speaking of the Colts, after hearing Ed Reed assess Manning’s neck surgery (an interview done this week prior to the Colts announcing he’ll be out possibly three months), the earliest we’ll see 18 take a snap an in NFL game will be 2012, if at all. The severity of this injury was one of the worst kept secrets in the league. It was pretty clear from context clues (the neck injury was impacting his right arm, struggled to lift light weights) that Manning wasn’t going to play for a long time. I watched someone take Manning in the first round of a fantasy draft this week and I wanted to give the guy a hug. He had no idea what was to come.

4. According to Roger Goodell law, dishonoring college football is far more significant than committing a crime or being called a gay slur by one of your employees.

5. Operation Dream Team begins today for the Eagles. No NFC team has more pressure on it to win.

6. Don’t be surprised if that QB mess in Washington leads to them beating the Giants today. New York has been ravaged by defensive injuries during the preseason.

7. If San Diego is a real Super Bowl contender, they need to beat Minnesota…handily.

8. I’m so fascinated by Cowboys/Jets tonight. The Ryan family dynamic is pretty cool. Meanwhile, the Cowboys offensive line has been a weak spot since Tony Romo has been a starter for Dallas. It’s going to be overload blitzes all night against the Cowboys.

9. Can we dump the second Monday night game idea on opening weekend? Don’t get me wrong. I’ll watch Raiders/Broncos but geez. One of these years we’re due another scintillating NFC West matchup.

10. Jay Cutler has been kicked around all offseason. It would be nice to see him care and get angry about it. Who am I kidding though? Expect a return to underachieving football in Chicago this season.

Detroit at Tampa Bay – One of these two teams might be a raging fraud. We could very well find out who it is today. I’m not sure why after years of failure Detroit is all of a sudden receiving the benefit of the doubt. After all, Matthew Stafford has played in 13 of a possible 32 games in two seasons.

Today marks the 10th anniversary of 9/11. Take time today to remember those who helped keep this country going in the wake of that tragedy.

Thank you to all of those that allow this country to be the best in the world.