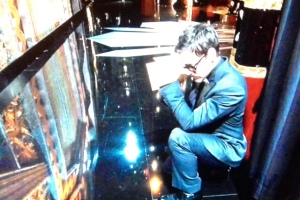 During my channel-flipping marathon between the Oscars and NBA All-Star Game on Sunday night, I stumbled across Robert Downey Jr. performing something that greatly resembles Tebowing. It’s not a J-Lo near mishap but it’s good to see someone directly or indirectly spreading love for the shield.

While he elected to not throw at the NFL Scouting Combine on Sunday, Robert Griffin III ran the 40-yard dash in an unofficial time of 4.38 seconds. The big winner may eventually be St. Louis, who has the number two in April’s draft.