This weekend marks WrestleMania XVIII and what is being billed as a “once in a lifetime” battle between The Rock and the WWE’s current Hulk Hogan-esque figure, John Cena. Speaking of the Hulkster, Thursday was a special anniversary for wrestling fans. It marked the 25th anniversary of what […]

Twenty-five years ago today WrestleMania III hit our screens armed with the most colossal main event of all-time: World Wrestling Federation champ Hulk Hogan defending against the “undefeated” Andre the Giant. Since it’s WrestleMania weekend, it’s only fitting to pay tribute to one of the most significant pop […] 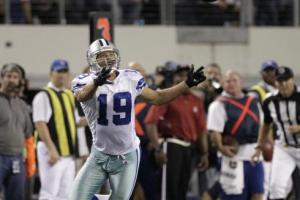 Giants To Open 2012 Season Against Cowboys

Thanks to a deluge of major off-season news, Super Bowl XLVI feels like it was played during the 1970s. As the owners meeting continues in Florida this week, the league decided to remove the Super Bowl champion Giants from the off-season back burner.

Rob Gronkowski is back from his busy Spring Break vacation and served the masses in Foxboro, Massachusetts on Tuesday. New England’s social butterfly tight end recently signed a two-year deal with Dunkin’ Donuts to pitch their product and aided the franchise by working the drive-thru window on Tuesday […]

https://twitter.com/#!/BobGlauber/status/183986072835989505 Besides Tim Tebow using the word “excited” at a record-setting rate, the best part of his press conference actually stems from comments by Giants co-owner John Mara. When asked about Tebow’s arrival to New York, Mara quipped that David Carr’s press conference will be on Tuesday. A […]

Tim Tebow Is Shopping For A Home Near Mark Sanchez

It looks like Tim Tebow is doing his best to mirror and replace Jets starting quarterback Mark Sanchez. 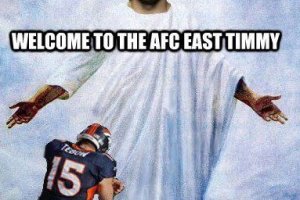 This picture puts a broad smile on my face. Tebow was 1-3 against AFC East teams last season (excluding the Jet win), including two beatings by Jesus Tom Brady and the New England Patriots.

As one can imagine, Tim Tebow’s face is splashed all over New York newspapers this morning to commemorate his arrival to the Big Apple as the newest member of the Jets. Tebow’s smile on the front page of the New York Daily News. You’d think he was dating Taylor […]

After haggling over $5 million of Tim Tebow’s contract, the Jets and Broncos finally agreed to a deal that would send Denver’s ex-starting quarterback to New York. That’s not the big news in this post though.