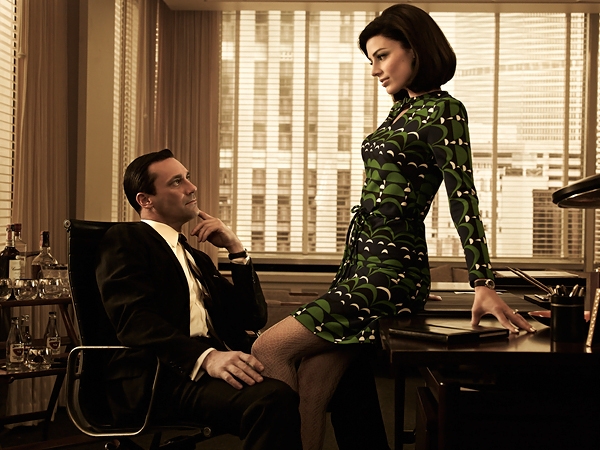 Throughout the fifth season of Mad Men, Don Draper appeared to be faced with a sizable dilemma.

Megan, his alluring wife, decided to leave the cynical world of advertising to pursue her dream of becoming an actress.

Of course, this counteracted Don’s plan of Megan waiting for him to return from a hard day’s work at the office in lingerie with a cocktail ready at his beck and call.

Building an acting career means traveling and not popping out mini-Drapers, which makes our benevolent hero unhappy. He has needs too.

Amongst numerous occurrences during “The Phantom” (including Don’s abscessed tooth, seeing the ghost of his dead brother Adam, and Pete Campbell getting beat up like Gerry Cooney), last night’s season finale highlighted the on-going struggle between the two over career and home-life as Season 5 drew to a close.

At season’s start, Don was hopelessly smitten with his leggy, Zou Bisou Bisou singing, French-Canadian wife. However, by season’s end, good-old Dick Whitman was prepared to re-visit his carousing dark side as he sat a bar being propositioned by a young lady.

As Don walked away from his wife and the Beauty & the Beast shoe commercial shoot as Nancy Sinatra’s “You Only Live Twice” blared in the background to usher in the closing montage, he appeared to grudgingly cede ground to her dreams but perhaps with at a cost.

After all, he gave Megan what she wanted; a starring role in a shoe commercial to help push her acting career.

Now, it’s time for Don to get what he wants…to be Don Draper; and not a cookie-cutter husband who believes in the “happy wife, happy life” theory.

The old Don Draper is returning. Whether he gets his advertising fastball back remains to be seen but it’ll probably mean more late nights, boozing, and hugging on twenty-something year-old women.

To borrow a sports phrase mashup from a friend, “adultery in 6.”

In other words, if Megan wants to act, Don will be on the prowl.

Despite Megan taking numerous hits during the show from being called a bitch by her passive-aggressive mom and to Don’s unwillingness to support her dream, she somehow still comes out a bit villainess in my opinion.

Don’t get me wrong. She is far from being a Betty Draper-Francis-like heel.

Nonetheless, our doe-eyed beauty clearly has a manipulative brat gene working on overdrive at times.

During the fourth season, she expressed to Don an interest in learning about his craft. So, what happened? The low-level secretary made a business decision. Moments later, she was doing the horizontal polka on his office couch.

That’s Megan though. She is impulsive and the embodiment of someone who desires to make something of herself – at any cost.

Just ask Megan’s poor actress friend who begged Mrs. Draper  during last night’s episode and vowed to be her “eternal slave” if she put in a good word with Don for shoe commercial role.

Instead of being a friend, Megan looked out for number one – herself – and chopped off her friend at the knees.

When Mommie Dearest II effectively told Megan that she was a loser whose best skill should be playing the doting housewife, Megan cried, got drunk, and sat in the crib watching TV in a nightie until her white knight rode in and put her to bed.

Yet, as we know by now, through all of the pouting and whining, Megan knows how to get what she wants from Don.

Ultimately though, she is going to lose this battle when she finds Don rolling around in bed with someone that looks like Natalie Wood.