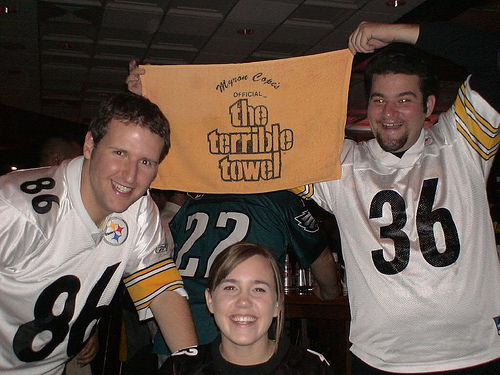 The Terrible Towel is truly terrible.

In an effort to follow the Eagles on their Manifest destiny of self-purported greatness, I’ll hit the road to enjoy the Delaware Valley on NFL Sundays. Week 5 finds us breaking bread with the enemy.

The Scene: For the first time on our journey, it was time to cross the bridge into Philadelphia…but with a minor twist. I decided earlier in the week to find a “Steelers bar” in Philly. So, I took to that new fangled creation called the Internet. You may have heard of it before. Of course, there is an actual website solely dedicated to finding Steelers bars around the country. So, between some combination of Zagat and Yelp, I made my decision to head to Fox & Hound. Oh, and this review of the place on Yelp, courtesy of a young lady named Jordan, helped too:

I was dragg– Er, brought along to the Summer Slam, a wrestling PPV that Fox and Hound so graciously decided to show and, for $5, we could all watch it, too! Luckily, we popped in a little early for dinner before the event started at 8 (read: around 7-7:15) and dodged the cover. Nicely done, us. Ordered some chips and salsa (endless, so good if you plan to stay for a while and not spend too much). The salsa was a little more acidic than I wanted it to be, with a weird sweetness, but that’s not to say that I wouldn’t eat it again if faced with the option. I just wouldn’t choose it over other salsas.

It’s worth a try if you’ve got a game you wanna watch that might not be showing at home, or a SUPER AWESOME WRESTLING SMACKDOWN that you’re dying to see but not dying to drop $50+ bucks on. So, if you’re into that kind of thing…. bon appetit!

Game: Philadelphia at Pittsburgh. Battle of the Keystone State. Cheesesteak vs. Roethlisberger.

Through the first five weeks of doing this, one point comes in crystal clear when venturing out to watch an Eagles game scheduled at 1pm. Saturdays are a hell of a drug.

A portion of the crowd in attendance at Fox and Hound seemed to be working through a mixture of boredom from the early games plastered on the big screen around the restaurant area; and still trying to work through the malaise of their Saturday night.

The 1pm start time is problematic if you were hitting it hard the night before. By the time you roll out of bed, eat breakfast, watch a few minutes of the NFL talking heads, and adjust your five fantasy football lineups, it’s already go time. 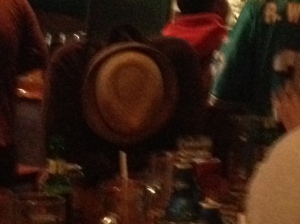 This guy definitely needed a 4pm or later start time.

Having already made the decision days earlier, I probably should have just slept in my car considering I was already in Philly around 1am early Sunday morning.

A glutton for punishment I am though and carried my half-awake self into Philly again.

When I walked into Fox & Hound, I was taken aback by the number of Steelers fans cozied up to the bar watching their beloved paragons of football take on the Eagles.

As mentioned earlier, I was well aware it was a “Steelers bar” but I wasn’t quite ready for the number of folks showing off their Steeler pride.

Pittsburgh fans young and old were decked out in their favorite jerseys and strutting around with their Myron Cope-endorsed Terrible Towels. Easily outnumbering the Eagles fans in attendance, Steelers fans were loud and proud.

A quick sidebar discussion if I may…

When traveling into the Delaware Valley, you most commonly stumble across four NFL fan groups:

The latter is normally in place because North Jersey kids come to South Jersey in some cases to go to college.

Option #2 is in place because the Cowboys once symbolized NFL superiority. They won five Super Bowls, including three in the 1990s. Despite losing their fastball as a franchise, youngsters (and old heads) are still lured in by the big blue star.

Option #3 is an infuriating one to me. In fact, this conversation took place while I sat at the bar during the second half.

RANDOM DUDE TO A FEMALE STEELERS FAN: “So, you’re a Steelers fan. Are you originally from Pittsburgh?”

You’re from Philadelphia and a Steelers fan? Ok, tell me about the pre-Chuck Noll Steelers… please!?!?

My only bit of logic for that revolves around a dislike of Philly and Dallas. If you don’t like either, hopping on the Pittsburgh bandwagon is evidently a viable option.

People in this area root for the Cowboys to be either a contrarian, overcome self-esteem issues, or just go into full scale frontrunner mode. Meanwhile, the Steelers group lives in the past…and present. 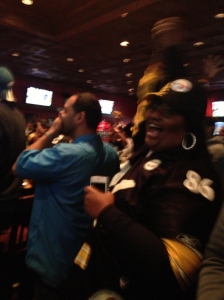 Yeah, yeah, yeah, we get it. Your franchise is awesome.

Much like Flyers fans, who love to romanticize the 70s, Steelers fans also love to relive their glory days of Terry Bradshaw, Jack Lambert, Lynn Swann, and Franco Harris.

Pittsburgh’s success didn’t stop in the 1970s with four Super Bowls though. They’ve appeared in three Super Bowls since 2005, winning a pair.

Remember the popular kids in high school you couldn’t stand? The ones who walked around in their varsity letter jackets or who always talked about the cool parties they threw while you weren’t invited?

That is the Delaware Valley version of a Steelers fan. Essentially, it’s their world and we’re just living in it.

Their fans just ooze self-confidence and a belief that everything will work out for them in the end.

When something goes wrong or there is a significant lull, they drum up a simple chant:

That makes all of the world’s ills go away for them. Poverty, homelessness, the national debt, etc. Along with that towel, it’s a serum that fixes everything for them.

As they should be.

Despite his proclivity to crash a motorcycle and allegedly harass young women, Ben Roethlisberger is the proud owner of two Super Bowl rings.

On the other hand, Michael Vick has a case of the fumbles (he committed his fourth and fifth during the game) and only two career playoff wins.

In other words, everyone in the bar had an idea of how this movie would end.

Pittsburgh sympathizers were louder and hungrier surprisingly. Eagles brethren seemed rather docile and ready to accept their fate.

A heavyset Eagles fan made his voice heard at the bar but not until the second half while Philly was down 10-0 and on death’s door, primed to get blown out of Heinz Field.

His passion fell on deaf ears until the Eagles finally staged a comeback. 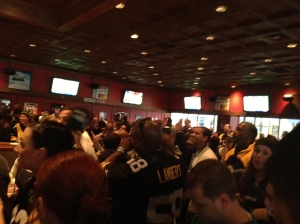 Only when the Eagles took a 14-13 lead late in the fourth quarter on a Brent Celek touchdown catch did Steelers fans show the least bit of pause.

Big Ben got the ball back though and went to work…as everyone knew he would.

Few NFL viewing experiences are worse than watching your team play in a game that they are destined to lose because the opponent’s clutch quarterback is driving the downfield.

A week after surviving one two-time Super Bowl champion in Eli Manning, the Eagles failed to survive against another.

Roethlisberger led the Steelers to a game-winning field goal to cap a rather lame 16-14 win over the Eagles.

Instead of making the usual catcall noises after the loss, the mood for Birds supporters seemed to be one of acceptance.

Elsewhere, Steelers fans turned up the arrogance by dancing and going back to that lousy Terrible Towel.

Three hours later after the entering the surprisingly charming bar/restaurant, I was still at a loss.

How are this many Steelers fans in Philly?

It was time to travel back home and soak in defeat.

I walked out of the bar and headed to my car, which was nestled in its $26 parking spot (Philly parking is obscene if you can’t do it on the street).

On cue, my ticket to get out of the lot didn’t work for some reason. So, I had to call for help.

A friendly female security guard stopped by to assist me.

Sequestered in her computer-free, TV-less office, she had a simple question for me.

“Who won the game? Did the Eagles pull it out?” she asked.

“Well, my dad will be happy. He’s a Steelers fan.”