Marshawn Lynch Would Rather Deal With Skittles Than The Media 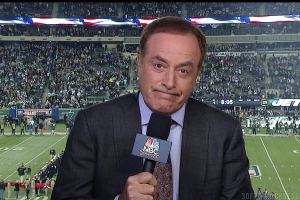 Al Michaels, who appeared on Monday’s B.S. Report with Grantland’s Bill Simmons, will be behind the mic for NBC on play-by-play for his ninth Super Bowl on Sunday when the Seahawks and Patriots clash.