The Rise & Fall Of The Philadelphia Eagles All In One Day 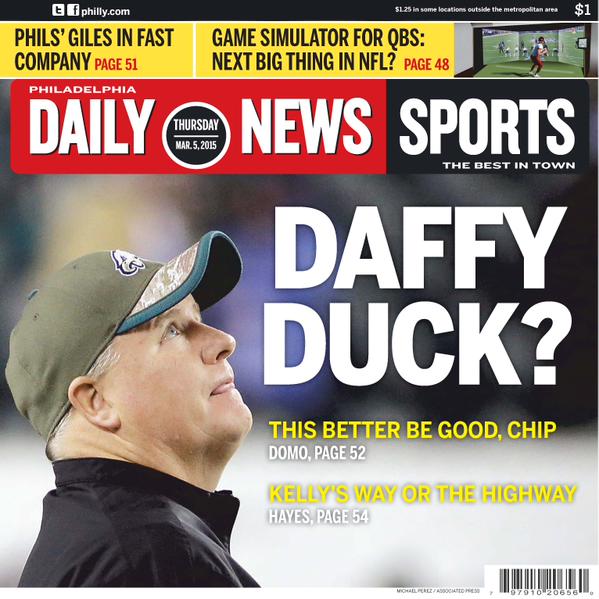 Whatever plan Philadelphia Eagles head coach Chip Kelly has moving forward, it probably should start going into motion pretty quickly after a Sunday that saw the Birds take quite a roller-coaster ride.

The Eagles were very busy on Sunday during the “three-day window” prior to free agency starting on Tuesday where teams were allowed to discuss prospective deals with free agents.

First, the team reportedly will sign former 49ers running back Frank Gore to a three-year contract with $7.5 million in guaranteed money.

The Gore move comes days after the Eagles dumped Pro Bowl running back LeSean McCoy to the Buffalo Bills. Gore, 32, has nearly 3,000 touches (including postseason) over 10 seasons with the 49ers.

Gore’s arrival could be nothing more than being a better (and considerably cheaper) fit in Kelly’s system than McCoy. If that’s not the reasoning, nothing else makes sense. McCoy has over 1,000 fewer touches and is six years younger than Gore.

Also, the Eagles reportedly nabbed former Legion of Boom member and Seattle Seahawks defensive back Byron Maxwell with a five-year deal worth $53 million including $28 million guaranteed.

However, the biggest news of the day long-term could be who the Eagles didn’t sign. According to reports, Jeremy Maclin, Philly’s leading receiver from last season, is marching off to Kansas City to play for old boss Andy Reid.

Thus, the Eagles may head into the 2015 NFL Draft with significant questions at quarterback, running back, and wide receiver.

One guy thought to be possibly heading to Philadelphia was New England Patriots safety Devin McCourty. However, the allure of winning another Super Bowl and working with Bill Belichick appeared to be too great.

McCourty is heading back to New England and set to sign a five-year deal.

In all, the Eagles have a plan. I’m not sure what the heck it is at this point because they are missing things like continuity at quarterback, running back, and wide receiver. Plus, their secondary still needs work despite the Maxwell addition.

Other than those issues, they should be fine…or not.