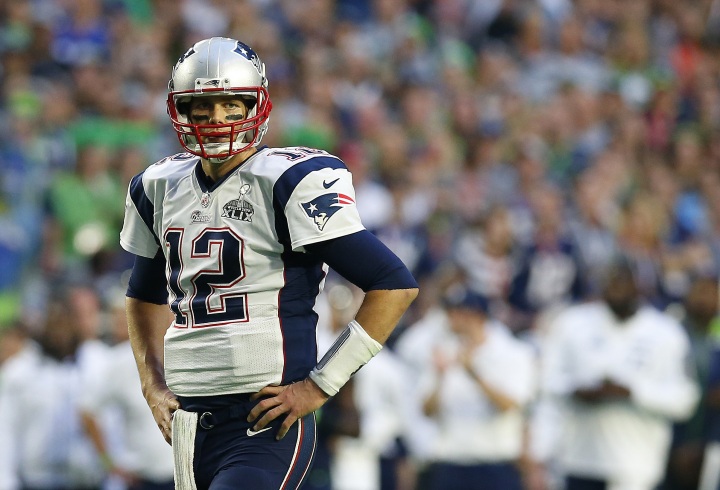 The New England Patriots make their first trip to Dallas since 2007…when they finished the regular season 16-0.

Also, it marks the first trip to Jerry World for the Super Bowl champions.

4:25 – The Philadelphia area, which is supposed to get this game is getting overtime of Ravens and Browns instead since it’s you know, such a crucial game to the landscape of the NFL. So, at the moment, I’m relying on Red Zone and the NFL’s dreaded Mobile Pass app until someone loses this game.

4:28 – Dallas goes three and out right away. First time out for Patriots offense.

4:32 – On 3rd down in Dallas territory, Brady gets eaten up by a returning Rolando McClain and all-around questionable character Greg Hardy. First punt in a good while for Pats.

4:36 – Donta Hightower plants Brandon Weeden into the turf on third down. Cowboys punt in back. Moments later, Greg Hardy returns the favor by smoking Brady. Patriots cash-in first in part from a 25-yard punt return by Danny Amendola.

4:39 – Greg Hardy is very good at football but hasn’t mastered being an exemplary human being yet.

4:44 – Thankfully, the Browns put Baltimore out of their misery. Thus, the game is on finally in the Philly market. GAME ON.

4:50 – Dallas nickles and dimes their way down the field, which leads to Dan Bailey tying the game up with a 51-yard field goal. It’s problematic when arguably your second best offensive weapon at the moment is a kicker.

4:59 – Hardy is everywhere in the first quarter as Patriots try to switch up and go heavier on the ground with LeGarrette Blount.

5:06 – While I’m watching the game, I also have the Patriots radio call on as well. Color analyst Scott Zolak described Jason Garrett’s 3rd and 1 call from DAL 26 as awful. Considering they opted for a bootleg pass with a backup quarterback instead of running behind one of the league’s best offensive lines, that is correct.

5:12 – A ton of pressure on Brady. Pressure, pressure, fumble, sack. The Patriots can’t protect Brady and it’s mostly due to Hardy’s presence. Reeking havoc in the Patriots backfield.

5:20 – So far, Dallas’ offense looks slightly outmatched against New England’s defense. The Patriots are getting to Weeden with just three players. Another punt for the Cowboys.

5:21 – In other news, Gary Barnidge of Cleveland may have made the touchdown catch of the year earlier today in Baltimore.

5:32 – You know the best way to hold off a pass rush? Screens and a hurry up offense. The Patriots go into hurricane mode to wear out Dallas and setup the game’s first TD by their wayward, unknown quarterback:

5:39 – Another bad possession by the Cowboys offense and the Patriots get the football back with two minutes left. However, New England fails to manufacture any offense. Punt time.

5:52 – This halftime will be fueled by the rage of Tom Brady.

6:11 – Patriots take the opening drive of the second half and finally get Rob Gronkowski involved with with two 20-yard plus receptions. The drive is capped by an amazing juke move by Dion Lewis on a short TD catch from Brady. TD pass number 402 for Brady.

The rout is on. Duck for cover Jerry.

6:24 – In case you missed it, Dion Lewis…juker of Cowboys defenders.

6:25 – Dallas with the ball and believe it or not, starting to move. They are trying a new concept in football involving throwing past 10 yards downfield.

6:30 – Dallas opts not to go for it on 4th and 2 inside of the New England 10. Instead, Dan Bailey hit a short field goal after an eight-minute drive. At this rate, will need five more field goals in the next 15 minutes to beat Brady and the Patriots. Best of luck with that strategy, Coach Garrett.

6:40 – The third quarter closes with New England possessing the football. Strange third quarter for Dallas. They get their confidence back on offense to settle for 3. Now, they’ll need two touchdowns just to tie the game in the next quarter. Bad coach is an epidemic, ladies and gentlemen.

6:46 – The Patriots finally figure out how to run wheel routes without getting called for offensive pass interference. It results in a 59-yard TD catch by Julian Edelman. The only bad news on the play for the Patriots? Brady got mutilated in the back by Greg Hardy. Ouch. That looked painful.

6:57 – Brady appears to be ok enough to celebrate. Disaster avoided.

6:59 – Dallas turns it over and New England wants to apply the FU score of doom but the Cowboys relent. They hold on fourth down and 1 deep in their territory.

7:04 – Brandon Weeden gets picked off by Logan Ryan of New England, which officially ends the competitive stage of this game.

7:06 – Big run by Blount opens up the next NE drive. Patriots close it out with a 34-yard field goal by Gostkowski. By the way, Zolak is slaughtering Dallas on Patriots radio. Referred to Hardy as a “horrendous person” and likened Garrett’s 4th and 2 call earlier to “kissing your sister.” STRAIGHT FIYAAAAHHH.

7:29 – Dallas fails to score in New England territory, and alas the Patriots have put the Cowboys to bed.

SUMMARY: It was business as usual for the Patriots, who improve to 4-0 despite Brady getting sacked five times during the first half. Meanwhile, the Cowboys are running out of offensive talent. They’ll need coaching to win them a few games considering their current array of offensive talent. Amazingly, they are in a tie for second place in the NFC East with a 2-3 record. Also, they are tied for last place in the NFC East with a 2-3 record. The moral of that story? The NFC East is terrible.

Without Dez Bryant and Tony Romo, you can’t hope for too much as a Cowboys fan until those guys come back.

Joe Jackson closes it out….