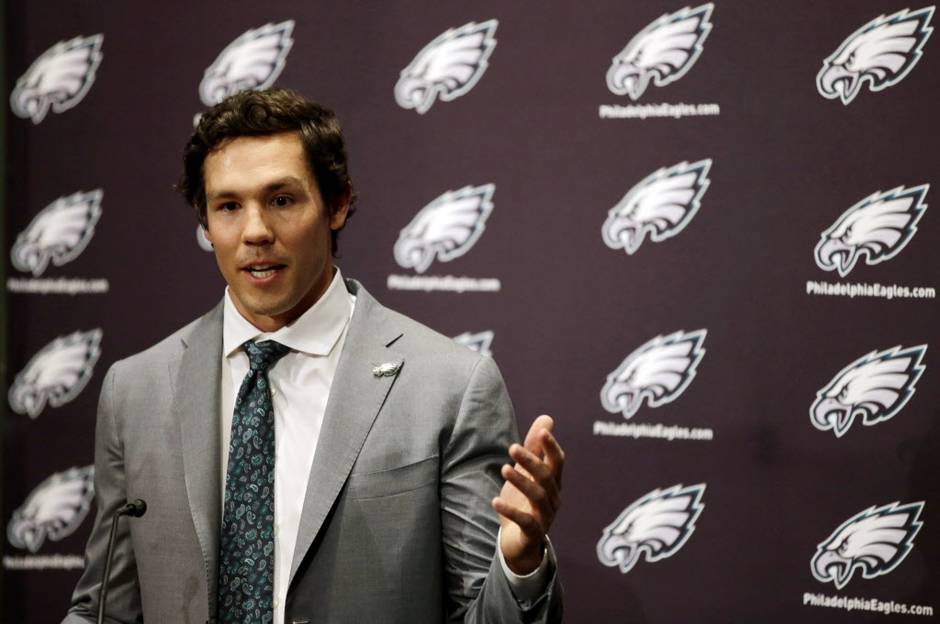 This is the second worst quarterback matchup of the season, right?

Is this worst than E.J. Manuel vs. Blake Bortles in London?

8:25 – NBC is about to rundown the Greg Hardy stuff. We agree he is an awful human, right? I get the “everyone deserves a second chance narrative” but in certain situations, they don’t deserve a second chance. This is one of them.

8:32 – Murray nets one yard on first two plays. Josh Huff gets buffaloed after making a catch but short of the first. Three and out for the Eagles.

8:33 – Cowboys get called for running into the punter, which thwarts any momentum for them.

8:35 – The Eagles are trying to beat the Cowboys with guys Dallas let go. Good luck with that. Anyways, I just blinked and the Eagles’ punt team is back on the field again. Great job, O.

8:44 – After they call a timeout, they go for it…and get it. Philly does not matchup well with Dallas.

8:46 – Disciple of Tom Brady throws to the poor man’s Julian Edelman for a touchdown. TRANSLATION = MATT CASSEL TO COLE BEASLEY. Poor sign for the Eagles.

8:52 – Eagles kick off their next drive with a false start. GLORIOUS.

8:54 – Sam Bradford shows up by hitting a 3rd and 18 throw to former Cowboy Miles Austin.

9:01 – Dallas goes three and out.The big news from this drive is that NBC just used this as the filler music for break:

9:24 – Eagles use effective running from Ryan Mathews to barrel their way into Dallas territory. However, the Eagles’ drive stalls at the DAL 1.

DeMarco Murray converts on a 4th and goal from the 1 to even up the game.

9:33 – FYI gets called for a personal foul after the Eagles’ PAT. What a shock! Greg Hardy doing bad things! Who knew!

9:35 – Darren McFadden looks good so far. 15 carries, 79 yards as Dallas arrives into Philly’s side of the field.

9:36 – Williams catches a TD pass from Cassel but is called for a blatant pushoff. Smart move by Williams. That probably would have been intercepted.

9:40 – A Brandon Graham sack knocks Dallas out of field goal range in the waning moments of the first half. Philly gets the ball back with a chance to take the lead but deep on their side of the field.

9:41 – One of the great interviews in Eagles/Cowboys history:

9:45 – By the way, Graham predicted that he would have 32 sacks this season. He needs just 29 more over the next two months.

9:48 – Eagles with the ball near midfield inside of the two-minute warning.

9:53 – Welp, that was anti-climatic. Eagles end up running out the clock after a couple of missteps.

9:56 – Your halftime viewing entertainment since this movie is on TV right now:

10:10 – Eagles D make a stop on 3rd and inches. However, Brandon Graham really thinks Dallas should get a first down and draws an unsportsmanlike conduct penalty for taunting. Peachy keen.

10:13 – Mychal Kendricks sacks Cassel on third down to force a punt.

10:20 – A 40-yard plus completion to DeMarco Murray puts the Eagles in prime position to take the lead…hopefully, maybe, I think.

10:22 – Eagles take advantage of a Morris Claiborne holding penalty. The drive culminates with a Ryan Mathews TD run. WE LIKE A FOOTBALL TEAM.

10:28 – The pressure is getting to Matt Cassel and by pressure I mean the Philly pass rush. Brandon Graham comes up with another sack. However, Dallas gets out of a 2nd and 18.

10:36 – Mini Edelman scores again for Dallas to tie it up off a TD pass from little Brady. Matt Cassel and his brutal fu-manchu hug Dez Bryant.

10:39 – Eagles get the ball back but their drive is shut down by Greg Hardy. Wonderful, just wonderful.

10:46 – I can’t believe this game has lasted three quarters without Bradford and Cassel throwing a back-breaking interception. That’s coming in the fourth, right?

10:56 – Long kickoff return by the Cowboys temporarily softens the blow of the pick six by Jordan Hicks. Let’s see if they can capitalize.

10:59 – On a third down, Cassel nearly gets sacked….stays alive…but throws up a prayer in the end zone with multiple Eagles hovering in the area…Dez Bryant comes down with it for six. Whatever dude.

11:03 – The loser of this game should hide in a closet for six weeks with the lights turned off.

11:08 – Dallas is coming down with a sudden rash of injuries amazingly.

11:40 – Dan Bailey banks in a game-tying 44-yard field goal off the left upright to tie it up. Some quality pass coverage to bring Bailey closer.

11:53 – Mathews gets the first down but fumbles the ball. Dallas recovers. Too bad he was down. Eagles ball.

11:56 – Bradford to Jordan Matthews for six! BALL GAME. Keep waiting for Tony Romo to come back, Dallas. Maybe you can hustle him back to go 6-10.

SUMMARY: Gigantic win for the Eagles to stay alive in the NFC L(EAST) race. See what I did there?!