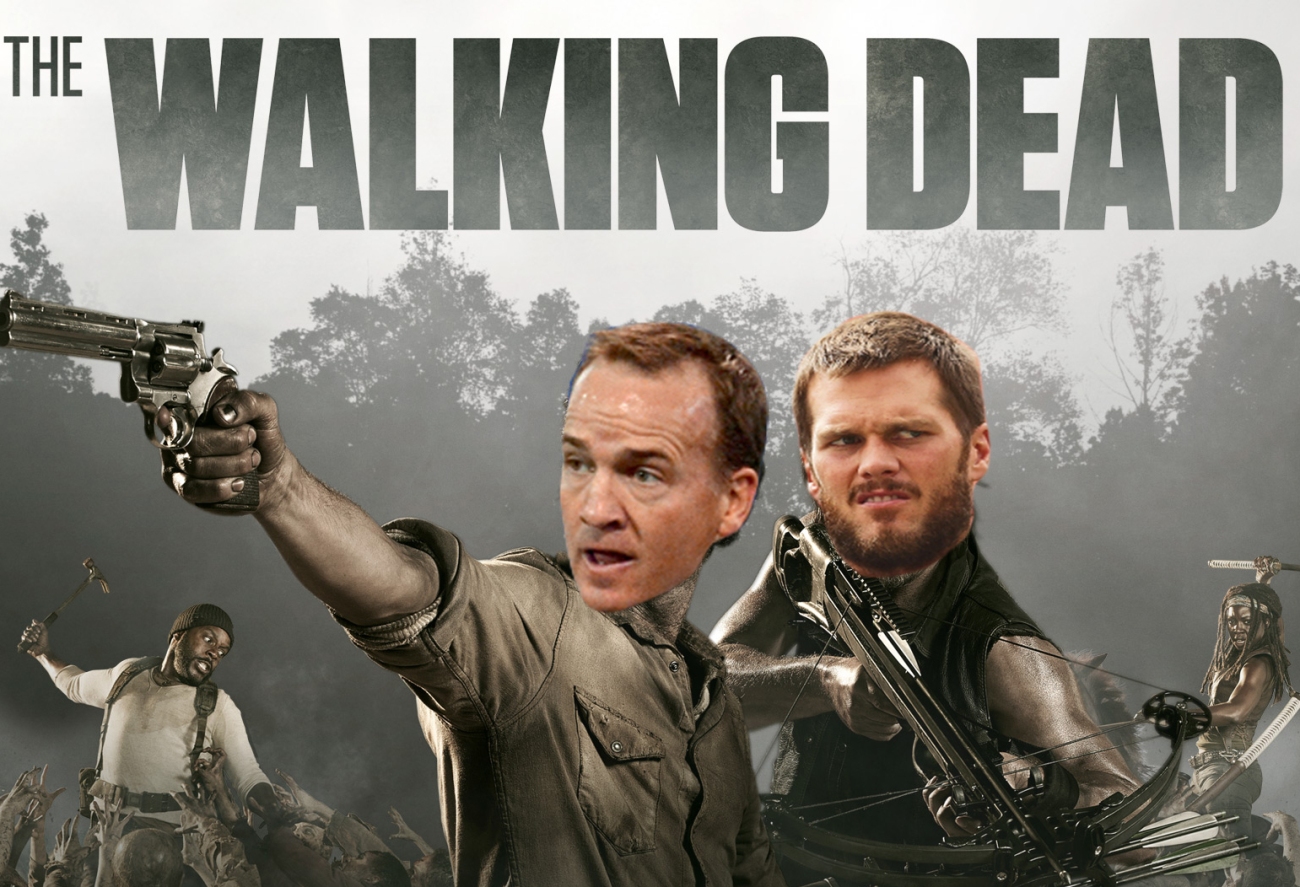 It’s not Brady vs. Manning XVII. Instead, it’s Brady vs. Osweiler I.

Am I the 50th person to tell this joke so far?

8:30 – Patriots win the coin toss but do Patriots things and opt to defer. Meanwhile, it’s expected to snow between 1-3 inches during the game.

8:33 – Brock Osweiler and the Broncos answer plenty of questions with how they will handle the defensive wizardry of Bill Belichick. They go three and out on the opening drive.

8:35 – After a porous punt, the Patriots take over near midfield.

8:37 – Patriots waste little time and zoom down the field with Brady’s short-passing attack. The drive is capped by extremely poor tackling and a whole lot of GRONK. Brady to the Big Guy for six.

8:41 – Another Denver possession and another three and out for the Broncos. Patriots get the ball near the 50 again.

8:46 – Broncos D answers the call by forcing a three and out of the Pats.

8:51 – Osweiler hits Emmanuel Sanders on a gain of over 20 yards at the 45 to kick start the drive. Denver gets the running game going as well. It’ll be interesting to see if the Broncos can hit 20 points tonight.

8:53 – Bennie Fowler lands about a yard short of the first down marker. 4th down and decision time for Gary Kubiak. They’ll go for it on fourth and inches.

8:55 – Osweiler sneaks ahead for the first down as its almost red zone time for the Broncos.

8:59 – ROOKIE OSWEILER shows up. He takes a 14-yard loss and they get knocked out of field goal range. Woof.

9:03 – Brady gets sacked on first down to christen the next New England drive. However, he rallies back to hit Brandon Bolden for a first down. A clean first quarter comes to an end with the Patriots on the stroll…

9:12 – Neither Michaels or Collinsworth are wearing suits. All winter gear for these gentlemen. It’s officially football weather.

9:15 – Aqib Talib is a good football player. He isn’t exactly the posterchild for good play. He gets called for unsportsmanlike conduct for blocking Patriots gunner Matthew Slater out of bounds.

9:16 – Stop me if I’ve said this before but the Russell Wilson commercial with Macklemore is disturbing on multiple levels. If I found Macklemore in my house in any capacity, I’m calling the cops. Creeptastic.

9:19 – Al Michaels grabs the irony of the 6’8 Osweiler throwing a pass that gets batted at the line and intercepted by New England’s Chandler Jones inside of the Denver 20.

9:22 – New England makes Denver pay dearly for the interception. Scott Chandler hauls one in for once on a nine-yard toss. BTW, Broncos safety TJ Ward was carted off earlier. His replacement gave up the easy score.

9:27 – Another punt coming up for the Broncos’ offense.

9:28 – The best part about watching guys play in the snow is seeing how cautious everyone is because nobody wants to fumble or slip. It’s like watching a collection of folks ice skate on grass.

9:30 – BTW, Michaels mentioned the name Dan McGwire earlier. McGwire, a former Seahawks quarterback, is the tallest QB in NFL history. Here is taking on one of the greatest teams of all-time, the 1992 Dallas Cowboys.

In other news, the next New England drive is in progress…

9:32 – Gronkowski makes the catch on a 3rd and 5 but the Broncos go low on the tackle as they are known to do. Gronk is stopped short of a first. Punt time for the Pats.

9:40 – Donta Hightower is out for the Patriots. Big loss.

9:41 – Ronnie Hillman finishes a 10-play, 77-yard with a touchdown run. Game on. Just over two minutes left before half.

9:48 – Somewhat of a bizarre final two minutes of the half. The Patriots try to run themselves into a FG attempt. However, the Broncos hold but are content with letting much of the half run out without using one of their three timeouts. Kubiak must figure he’ll quit while he is ahead (sort of).

9:51 – Let’s see how the Patriots do without Hightower. It looks unlikely that he’ll return.

10:00 – Mark this date down. Sunday, November 29. Bob Costas ended the Brady/Manning debate in favor of Brady. That’s like calling an election. Thanks Bob.

With Costas admitting Brady has won the Manning war, grief counselors are being sent to NBC

10:06 – The Broncos sack Brady on second down. Then, for some reason, Miller attempts to nail Brady further once he is lying on the grass. Dumb personal foul.

10:12 – Denver’s D holds it together near midfield. During this drive, Patriots had to burn a timeout. Somebody was not pleased…

10:17 – Broncos’ offense has found its groove. They cross midfield on a 3rd and 8 completion and facemask personal foul call against the Patriots.

10:19 – Osweiler hits Sanders on a big third down conversion that gains 21.

10:22 – A holding call screws up Denver’s momentum. McManus tries a 48-yard field goal in the snow and pushes it badly to the right. Pats still lead by 7.

10:25 – NBC has to create virtual numbers for people to see the numbers.

10:28 – Patriots swiftly go three and out after receiving good field position. Broncos make the stop on a 3rd and 2.

10:33 – Broncos do nothing on the drive but a good punt Colquitt Brother #1 gives NE a possession starting from their own 35.

10:38 – Patriots drive stall after a first down. A 34-yard punt gives Denver a little breathing room. I’m smelling overtime for this one.

10:42 – Osweiler goes to that time-tested option of Bennie Fowler on 3rd and 8. Incomplete. PUNT.

10:44 – New England can’t muster anything towards the end of the third quarter on the first two plays of their current drive. The third quarter ends in a stalemate. I feel like someone is going to do something atrocious to lose this game or swing the momentum. Onto the fourth…

10:54 – The Broncos go three and out again but disaster strikes the Patriots. Rookie receiver Chris Harper muffs a punt. Denver takes over in Patriots territory.

10:57 – Denver rallies on a catch and run by Sanders…followed by a nifty TD run by CJ Anderson.

11:00 – Here is a sub-tweet from Colts owner Jim Irsay who must be feeling some kind of way tonight.

11:05 – Patriots hit a 51-yarder to Keshawn Martin but it gets called back due to holding. Pats don’t recover out of a 3rd and 20 and have to punt from their own end.

11:06 – Momentum is wearing orange crush at the moment.

11:11 – CJ Anderson has turned into Jim Brown thanks to this snow. He has been impossible to tackle in the second half. Goal to go for Denver.

11:14 – Patriots D keeps Denver out of the end zone. McManus kicks a short field goal to cut the deficit to four.

11:21 – Patriots get ball back and cover on a third down throw to Gronk but he gets called for offensive pass interference, which essentially bludgeons the drive. Pats have to punt with under five minutes left.

11:25 – Patriots defensive coordinator Matt Patricia calls for the assassination of the Osweiler by dialing up serious blitz heat. Three and out for Denver.

11:28 – Denver’s c0nsistent targeting of Gronkowski’s legs finally paid off. They got him good. He’s down and possibly out.

11:34 – This is sad. Patriots punt. Demaryius Thomas makes the catch on a long throw by Osweiler.

No matter what happens here for New England, this night is a loss.

11:41 – Osweiler to Caldwell. Broncos take the lead with a lot of help from the officials. An absolutely disgraceful holding on Patrick Chung to wipe away a sack. Oof.

11:48 – Brady and Gostkowski save the day for the Patriots despite the officials taking a nap for the last 30 minutes of the game. Brady completes a sideline throw to LaFell to setup a 47-yarder in the snow for Gostkowski as time expires.

11:55 – The remains of the Patriots offense opens up OT. They go three and out after some heat off the edge by Von Miller and friends.

SUMMARY: The Carolina Panthers are the league’s only undefeated team as New England drops to 10-1. However, much bigger issues loom for New England. Injuries to Dont’a Hightower and Rob Gronkowski could be the end of the line for the Patriots.

Speaking of end of the line…see you next season Peyton Manning.

Until next time gang.