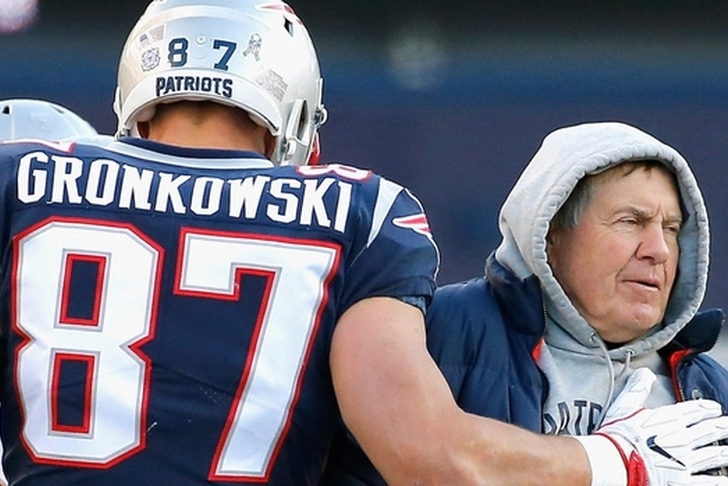 Last Friday, rumors circulated that the New England Patriots were set to trade all-world tight end Rob Gronkowski to the Tennessee Titans or San Francisco 49ers until Tom Brady caught wind of it, complained to owner Robert Kraft, and had the deal nixed.

I’m here to say that report is erroneous. How do I know that? Simple. Detective work.

First, Patriots head coach Bill Belichick and girlfriend Linda Holliday spent the weekend on the road in New York for the Belmont Stakes. As a part of the festivities, Belichick ran up a $60 hotel room service bill on blueberry pancakes and coffee, according to the New York Post.

If he dealt Gronk, do you think he’d quibble with such things like eating blueberry pancakes? They are delicious but Belichick’s football first mentality would have taken over at that point.

Elsewhere, Camille Kostek, Gronkowski’s girlfriend, was in attendance at the race as well with the future Hall of Fame tight end. On hand to support his bearing his name, Gronkowski, Belichick, and their significant others seemed to get along just fine.

Congratulations to #Justify 🐎on a thrilling victory at 2018 @belmontstakes to capture the triple crown! 👑👑👑 He’s the 13th horse in history to take this tremendous title! 🎉 *Fascinator by @mariegalvinmillinery

Kostek commented on Holliday’s photo with Belichick and said, “SO happy to see you guys!! You looked beautiful as always.” Meanwhile, Belichick and Gronkowski were reportedly quite chummy.

Here's an "official" way to conclude that @AdamKurkjian made up the Gronkowski trade rumor to bump his followers count.

Belichick was in NYC all day, not in the office working on a Gronk trade that "Kraft had to block because Brady was threatening to retire."

Look at that smile pic.twitter.com/i8qrqUKOaW

Does this look like a guy scheming to trade his All-Pro tight end last weekend? Reporter Adam Kurkijian and Dave Portnoy of Barstool Sports were fed bad info it seems. Both of their sources may have been to too many happy hours at 99 Restaurant in the New England region.

Anyhow, it appears someone is trying to actively ruin the remaining days of the Patriots Dynasty…from the inside. Yet, as long as Belichick keeps eating blueberry pancakes, everything will be just fine in New England.