This picture was captured during part two of A Football Life with Bill Belichick. During last night’s show, Randy Moss entered Belichick’s office and invited him to the team’s Halloween party. 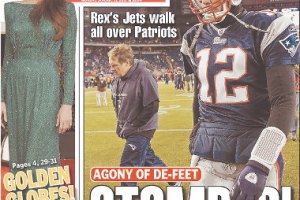 On a scale from 1 to 10, how excited is Bill Belichick to coach the AFC in the Pro Bowl? A negative 231?

When the Bears host New England at 4:15 today it will be the first time that Lovie Smith, Mike Martz, and Bill Belichick have been on opposing sidelines since…Super Bowl XXXVI. During February 2002, Martz was the opposing head coach in that game while Smith was his defensive […] 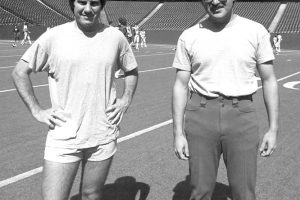 Tonight marks the return of the live blog for Jets at Patriots, which could prove to be the biggest regular season game of the year. While many would have you believe the winner of this game is a lock to win the AFC East, both have some difficult […]

[picapp align=”center” wrap=”false” link=”term=Randy+Moss&iid=9916760″ src=”http://view1.picapp.com/pictures.photo/image/9916760/new-england-patriots-miami/new-england-patriots-miami.jpg?size=500&imageId=9916760&#8243; width=”380″ height=”278″ /] According to ESPN and the NFL Network’s Mike Lombardi, the Randy Moss trade to Minnesota is expected to be finished on Wednesday. In exchange for Moss, the Patriots will receive Minnesota’s 2011 third-round pick. The true winner in this scenario […]

Music Monday With Bill Belichick, Who Is Filthy Rich