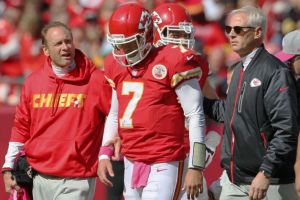 Green Bay’s failed attempt at a perfect season on Sunday in Kansas City caused a Wisconsin woman to choke her 11-year-old daughter. A 36-year-old drunken female from was charged on Monday in Outagamie County Court with felony child abuse and misdemeanor counts of bail jumping and disorderly conduct.

The quest for perfection is over. Kyle Orton and the Kansas City Chiefs scratched out a 19-14 win over the Packers on Sunday to drop the defending world champions to 13-1 on the season.

Perhaps Matt Cassel should consider pouring one out tonight for teammate Bernard Pollard. If not for the Chiefs safety, Cassel may not be joining the millionaires club. Of course, it was Pollard who altered any plans of New England getting back to the Super Bowl last September when […]