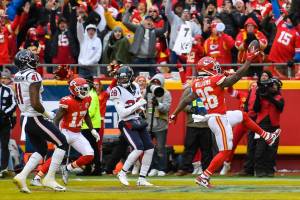 The Houston Texans led the Kansas City Chiefs 24-0 in the first half of Sunday’s AFC Divisional playoff…and then the roof caved in on them.

During Sunday’s AFC title game, the Kansas City Chiefs did something a tad unusual. Due to their massive postseason struggles, they don’t have a long list of postseason heroes they can bring in for motivational purposes.

The regular season finale of Thursday Night Football was simply amazing. The Los Angeles Chargers topped the Kansas City Chiefs 29-28 after scoring a touchdown with four seconds left and then deciding to go for two.

Live Game Blog: Chiefs At Rams – In & Out (Burger)

One of the most anticipated games of the 2018 NFL season has arrived. The Los Angeles Rams host (instead of Mexico City) the Kansas City Chiefs in what could be one of the highest scoring games in recent memory. 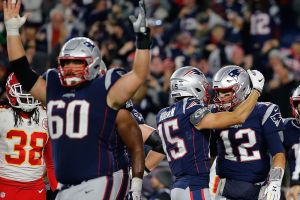 The New England Patriots knocked the Kansas City Chiefs from the ranks of the unbeaten in an instant classic on Sunday night. A new edition of The JMRA Football Podcast covers the fallout from an all-time epic between Tom Brady and Patrick Mahomes. 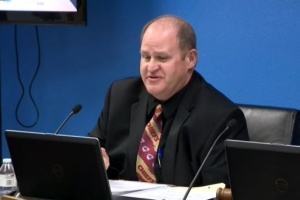 The star of Thursday’s OJ Simpson parole hearing turned out to be Adam Endel, the Nevada Board of Parole commissioner. Endel decided to sport a Kansas City Chiefs tie during Thursday’s hearing, which garnered national attention and why not?

The most dubious accomplishment of Andy Reid’s coaching career took place in Super Bowl XXXIX when his Eagles fell to the New England Patriots, 24-21. During that contest, Reid’s offense ran the first-ever five-minute, two-minute offense while down two scores. After finally scoring a touchdown, the Eagles were […] 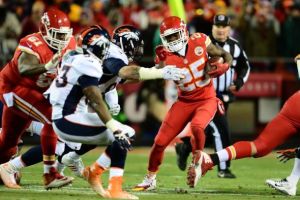 Here Is The Broncos Radio Call Of The Jamaal Charles Fumble

The Kansas City Chiefs literally gave away a chance to beat the Denver Broncos on Thursday night.

Kansas City Chiefs tight end Travis Kelce what most red-blooded Americans should do after scoring a touchdown…strut like Ric Flair. For the unaware, Flair is a legendary professional wrestler who styles and profiles with the best of them.