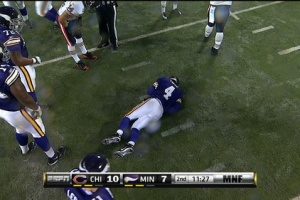 The Bears Win The NFC North & Conquer The Ultimate Warrior

Brett Favre, who Ron Jaworski labeled as the “ultimate warrior” during last night’s telecast, suffered a concussion after getting tossed to the ground by Chicago Bears defensive end Corey Wootton. The Bears trounced Favre and the Minnesota Vikings last night, 40-14, on Monday Night Football to win the […]

For those who thought Brett Favre was playing one of his usual games of “will he, won’t he” leading up to Sunday last night’s game versus the Giants, take a close look at Favre’s right hand in this picture. As shown on SB Nation, it is purple. Favre, of […]

Here is the amazing video of the Metrodome roof collapsing in Minnesota. As a result, the Giants will play the Vikings at Ford Field in Detroit on Monday night at 7:20.

http://twitter.com/#!/giantspathanlon/status/13679298032443392 A blizzard sacked the Twin Cities area over the past 24 hours and has forced the New York Giants to stay in Kansas City, Missouri for the night. According to Pat Hanlon’s Twitter account, the Giants will not depart for Minnesota until tomorrow morning. All of this begs […]

During an interview that will air Sunday morning on the NFL Network, Brett Favre told Steve Mariucci that he does not plan on playing in 2011. Mariucci asked Favre directly if he would be back to play in his 21st NFL season. The future Hall of Famer shook […]

Randy Moss Through the Prism of Auto-Tune

DJ Steve Porter is back but this time putting a spin on Randy Moss and some of his greatest comments ever. Straight cash homey.

As one can tell by this picture, it was a long day for Brett Favre and the Minnesota Vikings. No, he did not suffer a fractured rib or shoulder injury as this picture might suggest. Instead, he was knocked woozy by the Patriots defense and suffered the indignity […]