While the Grammys took place in Los Angeles last night and WWE fans freaked out about Daniel Bryan not appearing in the Royal Rumble, Nick Foles was out in Honolulu handling his business. The Eagles quarterback finished 7 of 10 for 89 yards and a touchdown – thrown […] 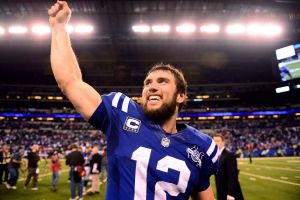 In Case You Care, Andrew Luck Was The First Overall Pick In The 2014 Pro Bowl Draft

The NFL’s effort to save the Pro Bowl continued on Wednesday with the first-ever fantasy draft televised on NFL Network. Hall of Famers Deion Sanders and Jerry Rice played general manager on each side. Thus, instead of using the typical conferenced format, Sanders and Rice were allowed to […]

Since Players Will Not Go 100 Percent At The Pro Bowl, Fans Pick Up The Slack

The NFC won Sunday night’s Pro Bowl 62-35 but a group of fight-thirsty fans ended up stealing the show. During another forgettable Pro Bowl, fans brawled just a few feet away from the AFC bench.

From the master of the obvious department, Houston Texans running back Arian Foster says not to expect players to go “100 percent” at the Pro Bowl. Following Pro Bowl practice, Foster told The Houston Chronicle that while the Pro Bowl isn’t necessarily a joke, it’s unrealistic to expect […]

On a scale from 1 to 10, how excited is Bill Belichick to coach the AFC in the Pro Bowl? A negative 231?

In Case You Missed It…

Assuming you watched Edge win the Royal Rumble, Beyonce take home a record breaking six Grammys or had some laundry to catch up on, here’s a brief recap on Sunday night’s Pro Bowl in Miami. Texans QB Matt Schaub was your MVP. Too bad Bryant McKinnie wasn’t there […]