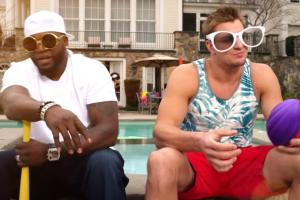 Two of Boston’s most popular figures teamed up to provide a duet that will serve as nails across the blackboard of your life or make you cackle for hours. Boston Red Sox slugger David Ortiz and New England Patriots tight end Rob Gronkowski combined to sing in a […]

The New England Patriots were a part of the opening day festivities for the Boston Red Sox at Fenway Park. Flanked by Patriots owner Robert Kraft, team president Jonathan Kraft, Bill Belichick and their four Vince Lombardi trophies, Tom Brady threw out the first pitch prior to Boston’s […]

Ten Things To Do In Hattiesburg By Brad Childress

[picapp align=”center” wrap=”false” link=”term=Brad+Childress&iid=7647487″ src=”http://view3.picapp.com/pictures.photo/image/7647487/nfc-championship-minnesota/nfc-championship-minnesota.jpg?size=500&imageId=7647487&#8243; width=”380″ height=”253″ /] Vikings head coach Brad Childress paid a visit to Brett Lorenzo Favre earlier this week in Hattiesburg, Mississippi. While we know why Childress ventured down there, we know very little about Favre’s hometown and what else Childress could have done […]

Video of the Day: Ode to Mike and the Mad Dog