During a flight from Dallas to Philadelphia on Sunday, this popped up on my iPad screen while tracking Buffalo’s attempt at knocking Kansas City from the ranks of the unbeaten. Bills quarterback Jeff Tuel threw a pick-six late in the first half that Chiefs defensive back Sean Smith […]

The Kansas City Chiefs have the best record in football…and some of the best fans in the NFL as evidence by one child’s Halloween costume. This baby Andy Reid costume is now the champagne of Halloween outfits. 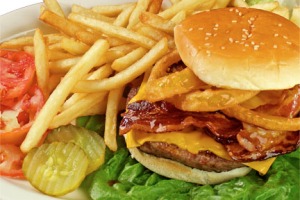 The Chip Kelly regime in Philadelphia is bringing down the iron curtain on fast food in an effort to get the team into better playing shape. Kelly recently eliminated two staples during the Andy Reid era – Taco Tuesdays and Fast Food Fridays.

Soon after the 2013 league calendar opens for business on March 12, reportedly Alex Smith will be a Kansas City Chief once he is dealt by the 49ers. Smith’s arrival marks the second in the last 25 years that a 49er quarterback arrived in Kansas City in an […] 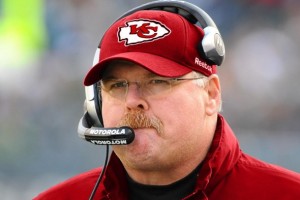 Andy Reid’s Chiefs Will Appear In Philadelphia In 2013

Perhaps the greatest part of Andy Reid’s jump to the Kansas City Chiefs as their new head coach is the realization of Big Red’s list of opponents in 2013.

Throwback Thursday: That Time When Joe Montana Was A Chief

The San Francisco 49ers opted to hand over the reins to Steve Young following the 1992 season and in turn, traded the franchise’s best quarterback – Joe Montana. San Fran dealt Montana in ’93 to the Kansas City Chiefs, a team that had a growing reputation for being […]

A movement called “Save Our Chiefs” is sweeping the midwest…and the nation. At over 100,000 Twitter followers, the grass roots campaign to restore order with the Kansas City Chiefs is getting some attention.

All of the NFL head coaching vacancies are filled after Tampa Bay surprisingly tapped Greg Schiano of Rutgers as their new boss.

That beeping noise you hear while looking at this pic is the sound of the Denver Broncos backing up their dump truck of a season into the playoffs. In the span of three weeks, Denver went from being media darlings to a team that looks like it’ll be […]