Jay Cutler Joins Dolphins; Reminds Us Why He Is Still Jay Cutler

Monday marked the official introductory press conference of Jay Cutler as a Miami Dolphin. In all likelihood, Cutler assume the starting quarterback role for the Dolphins that was previously occupied by the now-injured Ryan Tannehill.

Kristin Cavallari, the wife of Chicago Bears quarterback Jay Cutler, was in a celebratory mood on Monday night.

Jay Cutler Drops It Low On The Steelers

Remember when Jay Cutler’s toughness was questioned during the 2010 NFC Championship game against the Packers? A different Cutler is in Chicago at the moment. He ran over unsuspecting Steelers defensive back William Golden to help stifle Steeler second-half momentum.

We interrupt Ray Rice falling off of a parade float and the rest of the world champion Baltimore Ravens partying like Pitbull to bring you news on loathsome Jay Cutler. Earlier this week, Cutler was voted as one of the most disliked athlete in sports, which is somewhat […]

The Chicago Bears are free-falling out of the playoff picture after yesterday’s 21-13 loss to the Green Bay Packers in the Windy City. Jay Cutler was among the unhappy Bears during Sunday’s loss. Green Bay’s Casey Hayward intercepted the Bears quarterback on what appeared to be miscommunication between […]

Chicago Does The Cutler

Funny video from the folks at the Chicago Tribune about the quirks of Bears quarterback Jay Cutler.

Smokin’ Jay Cutler Is The Coolest Kid On The Block 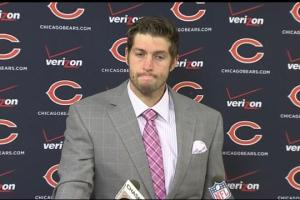 Bears quarterback Jay Cutler (with some assistance from a porous offensive line) laid an egg last night during Chicago’s 23-10 loss to the Packers. Green Bay sacked Cutler seven times and picked him off on four occasions.

Jay Cutler Injury Sure To Cause Chaos In NFC Playoff Race

Chicago Bears quarterback Jay Cutler is reportedly out for the remainder of the season with a broken right thumb suffered yesterday during the team’s 31-20 victory over San Diego. At 7-3, the Bears appear to be in good standing to reach the NFC playoffs as a wild card. […]