The JMRA Guide To The NFL Playoffs: Pittsburgh Steelers

This is the next installment in our examination of the NFL playoffs as we provide brief looks at teams participating in this year’s postseason run.

Our look at the bye teams begins with that cantankerous bunch from Pittsburgh.

Best Case Playoffs Scenario: Pittsburgh’s offensive line does just enough to give Ben Roethlisberger time to throw downfield to Mike Wallace and allow Rashard Mendenhall to make big plays in the running game. Of course, the defense does its thing led by Troy Polamalu, James Harrison and Aaron Smith(?).

Worst Case Playoffs Scenario: The Steelers play one of those bloodbath games with Baltimore and either get knocked out or limp into a potential AFC title game on the road at New England. Honorable mention is awarded to an injury that keeps Polamalu off the field or renders him somewhat ineffective.

Bizarre Note Regarding Pittsburgh, Pennsylvania: The Pittsburgh Flood of 1936 resulted in water levels of 46 feet and caused roughly $250 million in damage. The flood destroyed close to 100,000 buildings in the city. 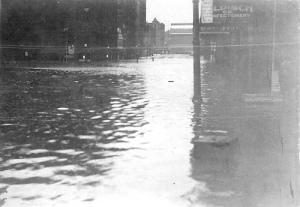 A Reason Why The Steelers Should Be Worried: Pittsburgh ranks 25th in sacks allowed in 2010. Their multitude of quarterbacks were planted 43 times. Pittsburgh’s offensive line play led to them going 2-4 versus 2010 playoff teams. With numbers like that, it’s somewhat difficult to envision them knocking off Baltimore and New England/NYJ over the next two weeks.

Bad Moment In Steelers Postseason History: If you ever want to stop a Steelers fan from romanticizing the 70s, mention the 1994 AFC title game.

Pittsburgh blew a 13-3 second half lead at home and allowed the Chargers to win the conference en route to getting torched by the 49ers in Super Bowl XXIX.

One of these days, we’ll put together a list of the worst/inexcusable losses in postseason history. This one is easily in the top five and ranks as one of the darkest moments in Steelers history.