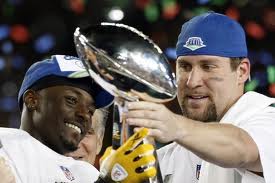 When I finally wrapped my head around this game last Sunday night, I had two immediate thoughts.

My mind stayed on concept number two for quite sometime. If you’re a fan of some other team, who do you root for?

A vote for New York supports Braylon Edwards, who was arrested for a DUI earlier in the season and made it common practice to do backflips after playoff wins.

Then, there is Bart Scott, who channeled his inner Randy Savage last Sunday in a post-game interview with ESPN’s Sal Paolantonio.

What about Antonio Cromartie? He made news earlier this season on HBO’s Hard Knocks when he labored to remember the names and birthdays of his nine kids by eight women over six states.

Let us not forget about the team’s leader, Rex Ryan. Every since Buddy’s son stepped foot into the Jets organization, he has been brash, brasher, and brashest in regards to his team being the NFL’s best.

(Editor’s Note: While we like to joke around about the whole foot thing, I’m not going to hold his enjoyment of his wife’s features against him. It’s actually rather refreshing to see a sports figure enjoy his better half.)

Then, there was the whole Brett Favre/masseuse fiasco, which followed the Ines Sainz debacle.

Across enemy lines we have the Pittsburgh Steelers.

Obviously, it’s somewhat trying to support a side in this race.

I tried to think back to some historical sports comparison for a game like this, but I stumbled across a movie instead.

The Black Godfather was a film produced back in the 1970s about two rival mafia groups battling over heroin.

Who was supposed to be the face in that outfit?

Crime lords versus crime lords to see who can find heroin and then sell it to people?

That film isn’t exactly overflowing with role models for the kids…and neither is this game.

Alas, it is my duty to analyze this contest, no matter how many nefarious figures lurk in the shadows on each side.

The Skinny: Mark Sanchez is trying to become the first AFC quarterback not named Brady, Manning, or Roethlisberger to reach the Super Bowl since the 2002 season, when Rich Gannon and the Oakland Raiders reached Super Bowl XXXVIII.

If Sanchez is to reach that destination, he’ll need to surpass the third player in that group, Mr. Roethlisberger and his Pittsburgh Steelers.

After surviving Baltimore last week, Pittsburgh brings in a banged up squad to Heinz Field that fell to the Jets 22-17 back in Week 15.

As for the Steelers, they will play in an NFL-record 15th conference championship game on Sunday.

A Pittsburgh victory lands Roethlisberger into his third Super Bowl in six seasons.

The Jets face a far different challenge in Roethlisberger than the relatively stationery targets of Peyton Manning and Tom Brady.

Big Ben is outstanding at keeping plays alive when pressure arrives. As a result, the big question for New York is how they chose to deploy their defensive weapons.

Do they send big blitzes towards Roethlisberger and trust Darrelle Revis, Antonio Cromartie and the rest of the secondary?

Or do they pull out the game plan from last week versus New England and concentrate much of their focus towards jamming passing lanes with defensive backs?

The former strategy could be very useful.

As pointed out this week during Bill Simmons’ podcast, Greg Gumbel and Dan Dierdorf made note of Pittsburgh’s offensive linemen dropping like flies last Saturday versus Baltimore in the game telecast.

Even when the line was at full strength, they did not rekindle memories of the great Steeler lines from the 70s.

Opponents sacked Big Ben 32 times and on 7.6 percent of his pass attempts in the regular season, which ranked amongst the league’s worst (coincidentally, Chicago’s Jay Cutler ranks dead last at 10.7 percent).

Thus, pressure on Roethlisberger and closing it out with sacks or at the very least causing indecision, will be paramount for the Jets defense

Back in Week 15, Big Ben went 23 of 44 for 264 yards and a touchdown. Towards the end of the game, Roethlisberger struggled to find open receivers as he got closer to the end zone on the game’s final drive. Eventually, New York’s pass coverage was air tight and prevented a Steeler victory.

Ultimately, the Jets can’t let Roethlisberger bail out the Steelers on third and longs. If he gets into long yardage spots, he must stay there.

Mark Sanchez has been living easy through the postseason’s first two weeks against a pair of solid but unspectacular defenses in Indianapolis and New England. He will be under plenty of fire facing the league’s number one defense.

However, this game will be in New York’s favor if they find themselves in plenty of third and short or medium yardage situations.

If they win on first down, they’ll likely be in that spot and thus, become a bit tougher to defend.

Last week versus New England, three of New York’s four touchdowns were scored on plays that required six yards or less for a first down.

If New York gets into those medium yardage spots, it’ll be slants, slants, and more slants to Santonio Holmes, Jerricho Cotchery, and Braylon Edwards, with the occasional deep ball sprinkled in the mix.

Pittsburgh’s ability to stay out of those spots by stopping the run and slowing down Holmes and Edwards will be pivotal.

SYNOPSIS: New York’s Brad Smith took the Week 15 game’s opening kickoff to the house. Then, in the fourth quarter, defensive end Jason Taylor slammed Rashard Mendenhall in the end zone for a safety.

In a game that should be a closely contested brawl, giving up those plays will likely cost someone a trip to Dallas.

Besides that factor, a Pittsburgh win is likely to center around someone other than receiver Mike Wallace being a factor. If he takes the trip to Revis Island, Emmanuel Sanders, Hines Ward, and tight end Heath Miller must help Big Ben push the ball downfield.

This is an extremely dangerous game for Pittsburgh because they are not healthy in critical areas including the offensive line and secondary with Polamalu banged up.

I’ve been on the anti-Jets bandwagon for two weeks though. At this point, might as well ride it out one more time.

I think Ben Roethlisberger will make just enough plays outside of the pocket to land Pittsburgh in a second Super Bowl in three seasons.