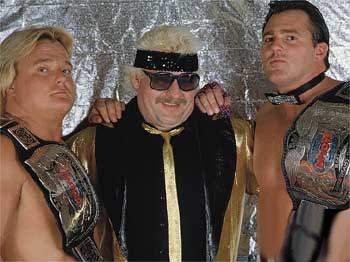 The long trek through the 2011 Philadelphia Eagles season continues as we compare the NFL’s Dream Team to an assortment of entities dubbed “Dream Team.”

The Cast: Greg “The Hammer” Valentine and Brutus Beefcake…managed by “Luscious” Johnny Valiant.

Synopsis: Pro wrestling’s Dream Team hit the scene in May 1985. It featured Valentine (then-WWF Intercontinental Champion and managed by Jimmy Hart) and Beefcake, a lesser-known wrestler who resembled someone that worked at Chippendale’s, managed by Valiant. Valentine, the hard-boiled son of wrestler Johnny Valentine, earned his stripes working in the National Wrestling Alliance and World Wrestling Federation throughout the 70s and 80s.

Beefcake, whose real name is Ed Leslie, began his career back in the mid-70s working with a guy named Terry Bollea. While Beefcake honed his skills in territories, his good buddy Terry morphed into some fella named Hulk Hogan, who became WWF champion in 1984. Later that year, Beefcake arrived in the WWF and eventually was under Valiant’s tutelage.

Mouthpiece: Both Valiant and Hart managed the team briefly until Johnny V took full control of matters by summer’s end. Valiant a former wrestler himself came off as a loud mouth New Yorker who enjoyed wearing odd costumes and smoking cigars.

Landmark Moment: After losing the IC strap to Tito Santana in July of ’85, Valentine and Beefcake took aim at tag team gold. Their reign as tag team champions began on August 24, 1985 in Philadelphia. Beefcake shoved a “lit cigar” in Barry Windham’s eye to secure a victory. The Dream Team’s title run lasted until April 7, 1986 when they lost to the British Bulldogs (who were led to the ring for that match by Ozzy Osbourne) at Wrestlemania II in Chicago.

Weak Link: As Wrestlemania III drew closer, it appeared Beefcake was being phased out of the team. Valiant started bringing around Canadian strongman Dino Bravo as a member of the posse. When Beefcake slipped on the proverbial banana peel at Wrestlemania III in 1987, Bravo stepped in to form the “New Dream Team” with Valentine. Meanwhile, Beefcake’s career took off. Soon after being kicked out of the Dream Team at WM III, he began his improbable and memorable run as a barber during the Rowdy Roddy Piper-Adorable Adrian Adonis haircut match at the same show.

How They Compare To Philly: The Eagles are missing a Greg Valentine type on defense. Valentine was a rock. Philly has good corners and a solid defensive line. However, they are missing that defensive anchor. When you think Valentine, think former Eagles safety Brian Dawkins. Both were rocks. Conversely, Beefcake was a flashy type and didn’t exactly come off nearly as stout as Valentine. It worked though. What set the group apart was Valentine and Valiant. Every good team in the 80s needed a hype man/manager type and that was Valiant to a tee. Meanwhile, Philly’s theoretical hype man turned out to be Vince Young.

Advantage: Valentine and Beefcake were an underrated team that reached their potential. While the Eagles have yet to play a game, I’m getting a nagging suspicion that a collection of on-the-field issues (offensive line, linebackers) will conspire to doom the Birds. It would help if they had a better hype man than Young. Perhaps they could hire Valiant to do the talking for them.