50 Things That Happened Since Cliff Lee Last Won A Game 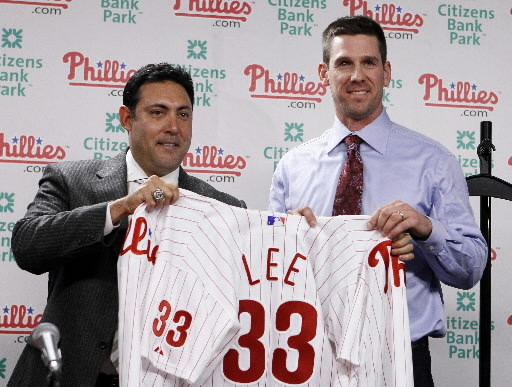 As the Philadelphia Phillies’ 2012 season sinks further into the abyss, Cliff Lee’s winless streak is one of the team’s defining storylines.

This version of the Phillies is sadly full of aging, highly paid players, who have either underachieved (Lee) or are injured (Roy Halladay, Ryan Howard, and Chase Utley).

Over nine months have passed since Lee’s last win; appropriately, your world has changed since that time. Let’s take a look:

1. The US declared an end to the Iraq War.

2. Mad Men started their fifth season on March 25 and finished it on June 10.

3. Girls premiered on April 15 and closed its first season on June 17…and has nearly completed shooting a second season.

9. A plan for a new college football playoff system was put into place for 2014; essentially disbanding the BCS in the process.

11. Cliff Lee blew a four-run lead to the St. Louis Cardinals in Game 2 of the NLDS.

12. Ryan Howard tore his Achilles tendon at the end of Game 5 of the NLDS.

13. The St. Louis Cardinals won the World Series in seven games over the Texas Rangers.

15. Howard began a rehab assignment for his Achilles injury.

19. Aaron Hill hit for the cycle…twice.

24. Kate Upton taught everyone how to Cat Daddy.

25. Peyton Manning was released by the Indianapolis Colts.

26. Peyton Manning was signed by the Denver Broncos.

30. The Adam Sandler two-ton bomb Jack & Jill was released in theaters…and on DVD…and is airing on cable.

31. Jerry Sandusky was arrested on counts of child sexual abuse.

35. The 43-year-old soap opera One Life to Live was canceled by ABC.

36. The Philadelphia 76ers won a playoff series for the first time since 2003.

37. Tom Coughlin threw out the first pitch at a Yankees game on June 30.

39. Jered Weaver threw a no-hitter in May.

40. Kevin Milwood and five other Mariner pitchers combined to n0-hit the Dodgers on June 8.

41. Kentucky men’s basketball won the NCAA title and had four of its players drafted in the first round of the 2012 NBA Draft.

43. R.A. Dickey became the best pitcher in the National League.

47. Adele announced she was pregnant with her first child.

48. The Hunger Games became a movie.

Yeah Cliff, it’s been too long.