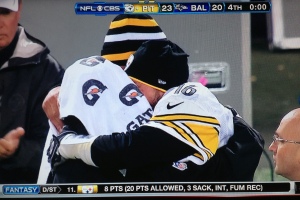 If The MVP Was Based Solely On Hugging, Charlie Batch Would Win NFL MVP Unanimously

For the first time in seven attempts, the Pittsburgh Steelers defeated the Baltimore Ravens without the services of Ben Roethlisberger. The much-maligned Charlie Batch broke the spell in a dramatic, last-second 23-20 win over the Ravens on Sunday.

Mark Sanchez Gets The Gate In Jets Victory

It took until Week 13 but Mark Sanchez finally played badly enough to earn the ire of head coach Rex Ryan, who benched the troubled Jets quarterback during New York’s 7-6 home victory over the Arizona Cardinals. Sanchez’s dreadful performance included a 10 of 21 effort for 97 […]

Andrew Luck and the Indianapolis Colts took another step towards the playoffs with a dramatic come-from-behind win over the Detroit Lions on Sunday. The 35-33 win helped put Luck into the record books.

In the aftermath of the Belcher story, this is eerie.

Welcome to Week 13 my friends. BEARS 23, SEAHAWKS 10 – Seattle is limping to the finish line. Plus, the football gods have to intervene and make sure they don’t get to the playoffs right? BRONCOS 37, BUCS 24 – Tampa Bay gives up over 300 yards game per game […]