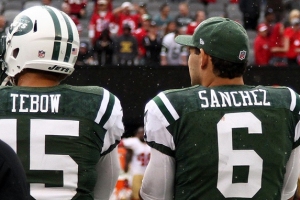 In the hours that followed another putrid performance by the New York Jets, a report claimed Tebow refused to be used as a part of a Wildcat package due to his growing frustration. Tebow, who was listed as the third quarterback for New York on Sunday versus San […]

The Jets 2012 Bloopers Reel Is A Real Knee-Slapper

The theme song from Benny Hill is a perfect marriage with the 2012 Jets, who have a date with a 6-10 record assuming they don’t figure out how to protect starting quarterback Greg McElroy by Sunday. Assuming the role of one of the NFL’s most disappointing teams in 2012, the […]