Ladies and gentlemen, Super Bowl XLVIII is upon us. Food, football, America.

To paraphrase one of the great philosophers of the 21st century, “I’m about that action, boss.”

6:15 – SEAHAWKS INTROS…with Kurt Russell talking over Metallica. Hahaha. Kudos to FOX for the “Escape from New York” touch with Russell.

Then, in a curveball they run out to the Verve’s Bittersweet Symphony…hope that’s not a harbinger of things to come.

6:17 – Oh, Kurt Russell is back again to intro the Broncos behind Led Zeppelin. Denver’s offense is great, etc., etc., etc.,

Denver’s intro reminds me of a circus. Complete with loud club music and a horse. Makes sense.

6:22 – Renée Fleming is out for the National Anthem. She can bring it. Good call. All your standard star shots from FOX.

6:33 – Trindon Holliday brings it out after being about seven yards deep. Denver backed up at their 14 to start.

6:35 – King Peyton gets crossed up with center Manny Ramirez and he snaps the ball past Peyton on the opening play. Oops. Knowshon Moreno gets tackled in the end zone. That’s the fastest score in Super Bowl history.

6:38 – Seattle gets the free kick and rumbles into Denver territory led by a Percy Harvin run. TD would be big here.

6:43 – Apparently, one of the officials is a cousin of Manning because he spots a Wilson run a good yard short after he gets the first down.

6:46 – Pete Carroll loses the challenge…not sure how exactly. Steven Hauschka comes in for clean up duty.

6:50 – Denver gets a gift at the 35 after a suspect personal foul call on the Seahawks.

6:53 – Denver goes three and out. Porous looking drive there. Hits and pressure against Denver. Bad sign.

7:03- Champ Bailey channels his 1973 Willie Mays and gets beat by Doug Baldwin on a long throw into the red zone.

7:04 – Fox challenges that a Harvin play is a backwards pass. Clearly, it’s not but then again, we don’t know with this crew.

7:07 – Jermaine Kearse nearly hauls in a TD pass on 3rd and goal but it’s broken up in the end zone. Another Hauschka field goal.

Damn Peyton, I know you're playing in your brother's stadium but you don't have to play like him.

7:22 – Seattle grabs the INT and scores after an egregious PI on Tony Carter. Hey Tony, you can’t grab a guy with two hands in the end zone AND not play the ball.

7:23 – Just About That Action Boss sets off a Skittles alert around the Seattle area with a 1-yard TD run. Get a slice of that Skittles pie will you?

7:30 – Denver had one first down before a Moreno run in the second quarter.

7:37 – I feel Moreno needs to do much more in this…Manning is dead in the water if Denver is a one trick pony.

7:41 – Manning gets pick-sixed after getting pressure. The NFC title game hero Malcolm Smith comes up with the INT for six.

7:49 – The Broncos are driving to salvage something after one of the most lackluster Super Bowl first half efforts in recent memory. Perhaps, the Seahawks are the new Bill Belichick…

SUMMARY: Welp, we know how this movie ends. Pressure on Manning, turnovers…this is a mix-tape of every bad Peyton Manning playoff game.

Wait, Janet Jackson shows a breast for 1 sec & it's biggest scandal ever, but Kiedis shirtless & no one cares? Women, you ok w/that?

8:33 – Welp, if you were hoping for a Denver revival in the second half, you can go to bed now. Percy Harvin just rocked you to sleep with an 87-yard TD return for a score.

8:56 – Denver driving…Demaryius Thomas makes a big catch downfield and then gets the ball punched out. Malcolm Smith makes the recovery. Woe is Denver.

9:04 – Seattle barrels their way downfield and the drive culminates with the worst tackling effort of the postseason. Jermaine Kearse scores on a 23-yard TD reception.

9:06 – Denver’s tackling on that play suggests that they are interested in the new episode of New Girl featuring Prince.

9:09 – In other news, congratulations to Phil Dawson.

As some folks suspected, Niners/Seahawks was the real Super Bowl. Congrats Phil Dawson on making it to the Super Bowl.

9:12 – Thankfully, Denver has scored. No one should get shutout in the Super Bowl. Demaryius Thomas sets a Super Bowl record with a 12th reception that results in Denver’s first score. Welker gets 2. My Dad is very worried about Welker’s safety.

9:19 – Seattle is back out on offense. Meanwhile, former WWE wrestler Chris Jericho can sympathize with Denver.

Trust me, I know what it's like to suffer an embarrassing loss in MetLife stadium….

9:33 – Interesting post game development. Richard Sherman goes out with what appears to be a rather serious injury. Had to be carted off. Once again, the football gods always win.

9:44 – After Seattle opts to take the foot off the gas pedal on fourth down. Denver has looked disinterested in playing for nearly the entire second half.

9:48 – Another awful Broncos drive culminates in a turnover on downs while the Seahawks bring in the human victory cigar for Russell Wilson…Tarvaris Jackson.

9:56 – There’s your season folks…Seattle rides off into the sunset with the Vince Lombardi Trophy.

9:57 – Meanwhile…for the vanquished Broncos, all aboard the Struggle Bus. 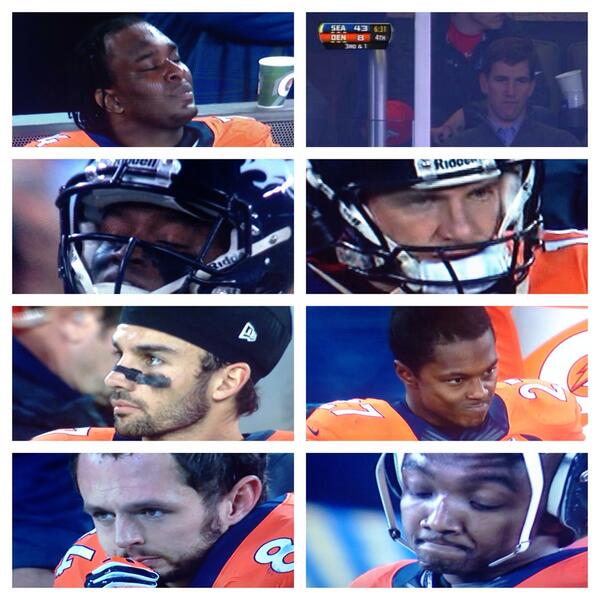 SUMMARY: Easily, one of the greatest Super Bowl team performances of all-time goes in favor of the Seattle Seahawks. They whipped Denver in every facet of the game. More on the legacy stuff later this week. If you’re going to say that this game would cement Manning as “the great QB of all-time,” getting boat raced in a Super Bowl can’t be good for that narrative.