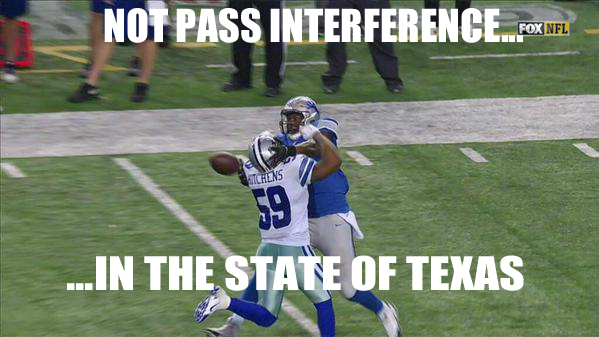 The Dallas Cowboys stole one in AT&T Stadium on Sunday when they overcame a 10-point deficit to defeat the Detroit Lions 24-20.

The game’s critical play came late in the fourth quarter with Dallas trailing 20-17. As the Lions marched into Cowboys territory and facing a 3rd and 1 from the Dallas 46. Matthew Stafford lofted a pass to tight end Brandon Pettigrew and it was ruled incomplete.

Cowboys linebacker Anthony Hitchens was flagged for defensive pass interference on the play. Despite the announcement of DPI made to the crowd at AT&T Stadium, the flag was mysteriously picked up moments later.

While the FOX broadcast crew questioned the call, CBS officiating guru Mike Carey offered an explanation of what happened:

Unfortunately for the Lions, defensive holding wasn’t called either.

Shockingly, nothing was called.

The Lions opted not to punt on 4th and 1 and eventually coughed up their lead as Tony Romo led the Cowboys to a dramatic comeback victory.

Clearly, that was the wrong call. That’s pass interference, without question.

Dallas plays at Lambeau Field next Sunday afternoon against the Packers.