World Wrestling Entertainment wisely cut ties with Hulk Hogan after the legendary sports entertainment icon allegedly made racist remarks about African-Americans during audio from a 2006 sex tape that was publicly leaked on Friday.

We all make mistakes. That almost doesn’t need to be stated. Hogan issued an apology on Friday via People soon after the story caught fire.

However, Hogan’s racist rant regarding his daughter Brooke over a possible sexual relationship with an African-American displays a man who wasn’t accepting of other people.

My biggest takeaway from this situation besides the obvious racial angles comes from the setting. Hogan allegedly had this conversation with another man’s wife that he happened to be sleeping with…as it was being recorded (unbeknownst to Hogan).  Wherever Hogan was as a person in 2006 when the aforementioned incident took place, clearly it was not a good one.

The culture surrounding Hogan wasn’t exactly a good one leading up to that point. The 61-year-old has been a part of wrestling since the 70s. Professional wrestling has never been considered a hotbed for cultural acceptance.

Former professional wrestler Dick Murdoch, who famously teamed with Dusty Rhodes during the 70s as a part of “The Outlaws”, was reportedly a member of the Klu Klux Klan. Stories from former wrestlers including Bad News Brown and Rocky Johnson (father of Dwayne “The Rock” Johnson) further backed the claim.

Meanwhile, racism typically crept its way on the screen to promote upcoming matches and get fans to the arena via feuds. Throughout wrestling history, racism was used to put “heat” (a term for negative crowd reaction in this case) on a bad guy.

Want to get fans mad in the 70s and 80s? Have a white wrestler call an African-American wrestler “boy” or reference the minority driving his privileged counterpart around. The hope was to get fans in front of the TV screen and into the arenas to see Good Guy X pummel his racist adversary into the ground. The ultimate goal of this tactic was simple: make a lot of money.

Back in 1986, the National Wrestling Alliance flipped the script. An African-American wrestler named “Pistol” Pez Whatley turned heel on his best friend Jimmy Valiant during a storyline that played out on the NWA’s World Wide Wrestling television program.

Let’s take a look at some of the dialogue from the incident:

(WHATLEY GOES CRAZY…HEADBUTTS AND SPITS ON VALIANT AND CUTS OFF HIS PONYTAIL.)

Upon finishing the beatdown, Whatley called Valiant a honky. The Valiant/Whatley feud was used to setup a series of haircutting matches during the NWA’s summer-long wrestling tour called The Great American Bash.

In the hours that followed Hogan’s WWE ouster, some wrestling fans wondered on Twitter why WWE CEO Vince McMahon got a free pass where Hogan did not. The situation in question revolved around a segment featuring McMahon playing his evil on-screen character “Mr. McMahon” during the mid 2000s.

McMahon walked up to John Cena, (the WWE’s answer to Vanilla Ice) who rapped and presented himself as a man from the streets, and asked “what’s good in the hood?” Moments later, McMahon used the slang version of the N-word as a term of endearment towards Cena in an effort to fit in with him.

While foolish and totally unnecessary, McMahon was playing a character – just like others did in the aforementioned occurrences of racism in wrestling storylines.

Today’s wrestling landscape is far different than at any point in American history. The WWE is now a publicly traded stock company. For someone that owns WWE stock and has an iPhone, they may have seen this today on their screen: 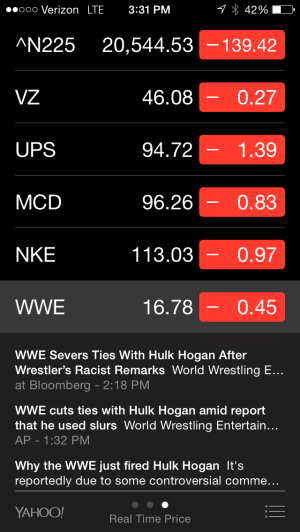 That screen grab shows Hogan’s name in step with a publicly traded company in the stock market. WWE is not going to hitch any type of wagon to someone who believes in spewing racist vitriol.

The company’s statement on Friday was short and to the point:

“WWE is committed to embracing and celebrating individuals from all backgrounds as demonstrated by the diversity of our employees, performers and fans worldwide.”

Decades ago, wrestling’s liberal attitude towards treating race as a serious matter and not viewing it as some ploy to grab interest may have allowed someone like Hogan to still draw a paycheck from a wrestling company.

That is one area where wrestling has evolved and gotten smarter. Unfortunately, Hogan as a person has neither evolved or gotten smarter it seems in the area of race relations.

As a result, WWE rightfully dropped its biggest star ever.