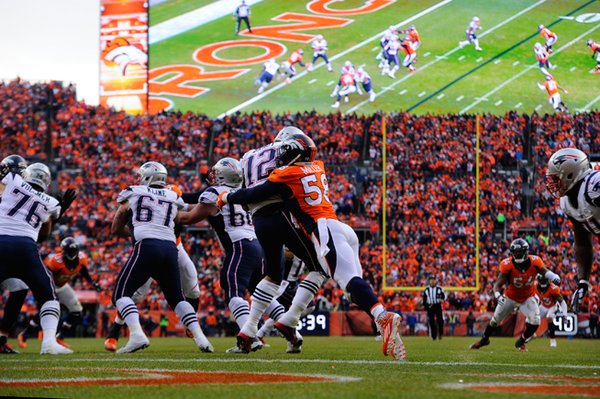 Brady vs. Manning XVII came down to defense. While the New England Patriots did an outstanding job defensively in their own right, the Denver Broncos brought the fight to Tom Brady over…and over….and over…and over again on Sunday.

The 20-18 Denver victory in the AFC Championship was highlighted by Denver’s outstanding performance up front including from DeMarcus Ware and Von Miller.

Brady threw the rock 56 times and in the process of using left tackle Sebastian Vollmer and right tackle Marcus Cannon as turnstiles, the Broncos did something that no team has done since 2006.

Per official stats, Denver's 20 QB hits was the most for any team since 2006.

Denver’s 20 quarterback hits on Brady were the most by any team on a QB since 2006. Of course, Miller led the charge with 2.5 sacks.

The combination of speed and the ability to get a jump on the opponent at home in Denver made the Broncos pass rush a nearly impossible challenge to deal overcome.