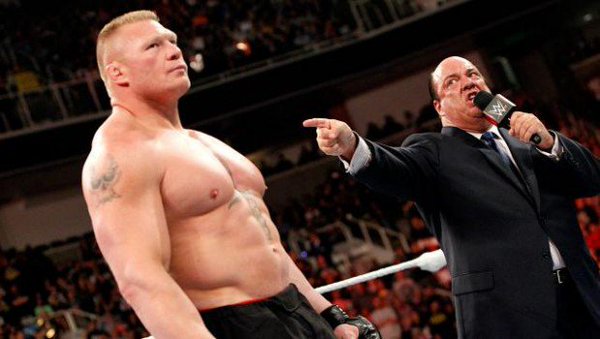 During his time in Minnesota, Burleson got a chance to see WWE star and most recently, UFC fighter Brock Lesnar in action during training camp in 2004.

Soon after ending his first WWE stint in ’04, Lesnar tried his hand at the NFL. While a member of the Minnesota Vikings, Lesnar put folks on notice that it wasn’t cool to mess with then Minny quarterback Daunte Culpepper.

Burleson recently told NFL Network that the former WWE World Heavyweight Champion worked over someone during a Vikings/Chiefs practice:

“He came out and somebody cheap-shotted Daunte Culpepper late. And Brock was like, ‘Who did it?’ The next play, he went and suplexed the guy. Different type of nasty, but he picked up a grown man after the play. It was a Royal Rumble: Minnesota versus Kansas City … That was a nasty suplex on the football field.”

I’m glad Burleson is up on his wrestling terminology by dropping a Royal Rumble reference in there.

Anyways, Lesnar suplexing someone is not surprising considering he is the mayor of Suplex City:

As that poor fellow in ’04 and Mark Hunt found out on Saturday, Lesnar is not to be messed with.

The next person to feel the wrath of Lesnar will be Randy Orton in late August at WWE’s Summer Slam.