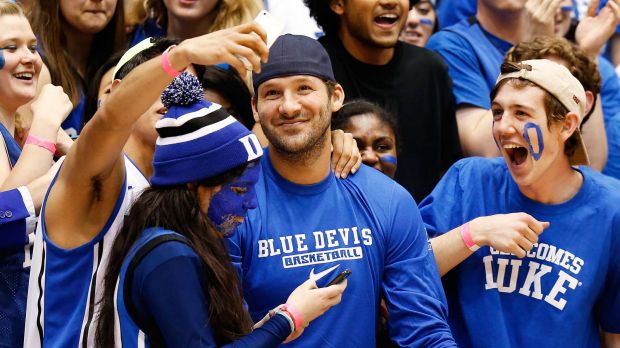 According to Marc Stein of ESPN, there is a movement within the Dallas Mavericks organization to honor former Dallas Cowboys quarterback Tony Romo next Tuesday.

The Mavericks plan to have Romo on the bench and in uniform for their game on Tuesday against the Denver Nuggets.

Romo, who has attended numerous Mavericks games since joining the Cowboys in 2003, is expected to assume the roster spot of injured point guard Seth Curry. Earlier this week, Romo announced he would be retiring from the NFL to join CBS as its lead NFL analyst and as a golf commentator.

The ex-Cowboys quarterback played basketball competitively in high school but this is something completely different.

Even though Romo has been a loyal fan of the Mavericks, why even do this is you’re owner Mark Cuban?

Just because you can?

Imagine what they would have done for Romo if he actually reached or won a Supr Bowl. Maybe allow him to play a half?

Meanwhile, there is some guy toiling away in the NBA D-League, who just lost an opportunity because Cuban and the Mavericks want Romo to feel important in Dallas one more time.