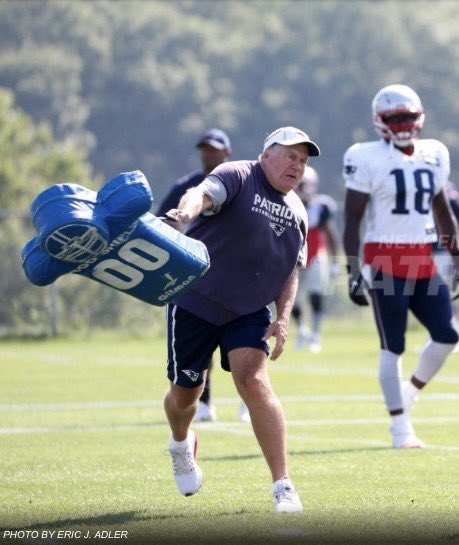 Tuesday turned out to be a glorious day for media members that look for something from New England Patriots head master Bill Belichick besides decisively gruff answers on football matters.

First, in a Tuesday morning press conference, he actually mentioned he played gin at one point during some of his down time.

Even if isn’t true and it’s just a joke, I chose to believe it since it was spoken into existence. Playing Gin is such a Belichick activity that it should be called Belichick Gin instead of Gin Rummy.

The true main event of the day (aside from the fight that led to Julian Edelman and Stephen Gilmore getting kicked out of practice) involved Tom Brady during a practice sessions.

As Brady dropped back to throw, Belichick, along with offensive coordinator Josh McDaniels, hurled pads at the quarterback’s body as a way to simulate some form of pressure.

It may not seem like a big deal but some sort of physical involvement from Belichick in practice further shows this guy is locked in 24 hours a day, 365 days a year.

While you’re sleeping, Belichick is creeping.