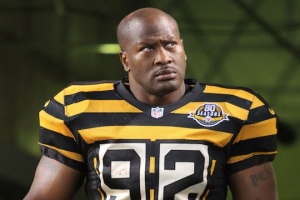 The Shield Strikes Back (Almost): NFL Threatens James Harrison And Others With Suspensions Over Al Jazeera Investigation

The Al Jazeera investigation into abuse of performance enhancing drugs by athletes may have a prolonged impact on the NFL. The league officially announced they would suspend four players for their lack of cooperation in the Al Jazeera report naming them as clients for a PED supplier.

Apparently, James Harrison Was Amused At His Suspension

https://twitter.com/#!/jharrison9292/status/146628481290211328 Upon receiving the news of his one-game suspension, Steelers linebacker James Harrison fired up Twitter with the all too popular “LOL” tweet. Harrison, who probably should have been suspended at the season’s start for calling NFL commish Roger Goodell the “devil” along with a gay slur, was […]

Inside The Head Of James Harrison