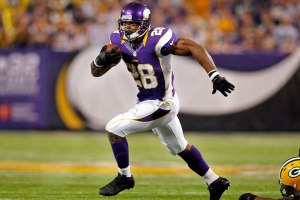 While You Were Sleeping, The Vikings Shut Down Adrian Peterson

Earlier this morning I was awakened by an alert at 2:26 that read: VIKINGS PLACE ADRIAN PETERSON ON EXEMPT LIST, WHICH REQUIRES HE REMAIN AWAY FROM ALL TEAM ACTIVITIES.

The Minnesota Vikings announced on Monday that Adrian Peterson will return to practice and is likely to play on Sunday against New Orleans. Shortly before a relatively awkward press conference featuring Vikings GM Rick Spielman and head coach Mike Zimmer, Peterson issued a statement apologizing in regards to […]

Tonight marks the regular season debut of Levi’s Stadium in Santa Clara, California, the new home of the San Francisco 49ers. Despite a promise reportedly given to the team in 2012, NFL commissioner Roger Goodell will reportedly not attend tonight’s Chicago/San Francisco Sunday night tilt. 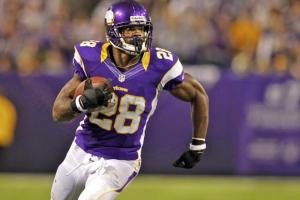 Minnesota’s Adrian Peterson is coming off the second-greatest rushing total for a running back in NFL history. Peterson, the 2012 NFL MVP, recovered from a torn ACL injury in under a year to rush for 2,097 yards last season. He finished just nine yards short of breaking Eric […]

Betty Draper Francis capped one of the great comebacks in recent memory by bedding ex-husband Don on last night’s edition of Mad Men.

Thankfully, football writers around the country did what is right for business and voted Minnesota Vikings running back Adrian Peterson as the NFL’s Most Valuable Player on Saturday night at the NFL Honors program hosted by Alec Baldwin.  Peterson defeated Peyton Manning, J.J. Watt, Aaron Rodgers, and Tom […] 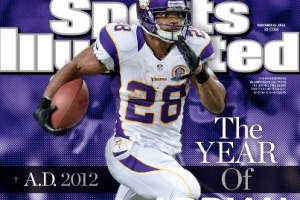 Minnesota Vikings running back Adrian Peterson and San Diego Chargers runner Ryan Mathews gave their respective teams a scare over the last few days thanks to a pair of hospital trips. Peterson was sent to the hospital on Monday after having an allergic reaction to jambalaya he ate […]

In honor of America’s favorite crystal meth dealer returning to television, we present the JMRA Week In Review…

The JMRA Week In Review: Adrian Peterson Goes To The Clink

Thank you for waiting for the facts. Truth will surface. — Adrian Peterson (@AdrianPeterson) July 8, 2012 The week leading into and immediately following Independence Day can be a snooze in the news department because folks are in party and/or vacation mode. Thanks to Adrian Peterson, so much […]