Since Players Will Not Go 100 Percent At The Pro Bowl, Fans Pick Up The Slack

The NFC won Sunday night’s Pro Bowl 62-35 but a group of fight-thirsty fans ended up stealing the show. During another forgettable Pro Bowl, fans brawled just a few feet away from the AFC bench. 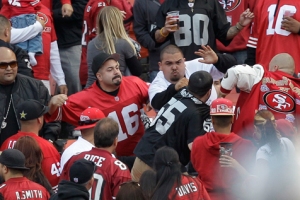 Eric Winston is really bent out of shape over Chiefs fans cheering the injury to a fallen Matt Cassel last Sunday. Perhaps Winston shouldn’t be so quick to jump to conclusions. Maybe fans were happy that action had stopped and they were no longer being tortured by watching […]

Months following the sad events that took place in Los Angeles following a Giants/Dodgers game, another San Francisco team is in the news after fan violence struck at Saturday night’s Raiders-49ers battle. Two men were shot outside of Candlestick Park following the game. A 24-year-old man, sporting a […]