Jerry Jones Says ESPN Is A Fountain of Misinformation

See, this is the problem with having Terrell Owens on your roster. Even if Jerry Jones really wants to keep him, he has to deal with all of the rumors that suggest the contrary.

Cowboys owner Jerry Jones is at a crossroads with Terrell Owens. Jones seemed to indicate at a press conference on Tuesday that Owens would return in ’09. However, this whole situation appears rather uneasy. Jerry Jones has one major problem holding him back potentially though: former Detroit Lion […]

One of the major free agent storylines will be where Ravens linebacker Ray Lewis ends up. The 13-year vet is the apple of Terrell Owens’ eye in Dallas. The oft-maligned Cowboys receiver reportedly spoke with Lewis and Cowboys owner Jerry Jones regarding the possibility of signing Lewis. Meanwhile, […] 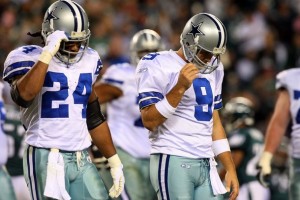 Over the next few days, we’ll examine the top 10 moments of the ’08 season leading up to the moment that defined the 2008 NFL season.

Game Over for Pacman Jones

The Cowboys released cornerback Adam “Pacman” Jones today after a rather tumultuous year with the team. By releasing Jones, the Cowboys will gain $1 million on the salary cap. In nine games with Dallas, Jones provided little impact defensively and failed to improve Dallas’ punt return unit. He averaged […]