Robert Griffin III took time off from his rehab duties during the 4th of July weekend to marry Rebecca Liddicoat on Saturday in Denver…and release a video about his love of candy. Hours after tying the knot with Liddicoat, RGIII posted a rap video on Facebook featuring Mr. […]

How can you not smile when seeing this picture of Robert Griffin III and Morgan Freeman?

RGIII Was Rather Emotional Over Louisville Beating Baylor Women’s Basketball

https://twitter.com/RGIII/status/318543559110307842 Washington Redskins quarterback (and proud Baylor alumnus) Robert Griffin III was hopping mad over Baylor’s shocking 82-81 loss to Louisville in the Sweet 16 of the NCAA women’s basketball tournament on Sunday night. Following the loss, which ended the career of the great Brittney Griner, Griffin took […]

Sadly, the 2012 NFL season is over. Before we completely close the book on the ’12 season, let’s take a final look at the 20 most popular stories of the season based off of your trusty reading habits.

For your listening pleasure, check out episode two of our humble podcast.

The New RGIII Logo Is A Bit Mean

Too soon. The pistol offense did in RGIII, no need to rub salt in the wounds. Photo courtesy of Tom Brady’s Ego. 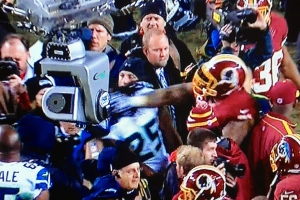 Seahawks cornerback Richard Sherman has never been one to shy away from confrontation. Whether it be Tom Brady, Jim Harbaugh, or the NFL, Sherman is not afraid to express himself. In the waning moments of Seattle’s 24-14 win over Washington, Sherman evidently mocked the Redskins from the Seahawk […]

Down 14-0, the Seattle Seahawks ripped off 24 unanswered points to stun the Washington Redskins, 24-14, at FedEx Field on Sunday in an NFC Wild Card game. Seattle utilized strong defense and a slowed Robert Griffin III to turn the momentum of the game in what turned out […]

There will be a new NFL champion come February after the Giants beat the Eagles and then needed help from three teams to make it. Of course, expecting the 4-12 Lions to deliver is like asking Burger King to make fillet mignon. It’s just not what they do.