Video of the Day: Kurt Warner Is Ready To Dance

It’s official. Kurt Warner will be on the new season of ABC’s Dancing With The Stars. Let the games begin. Can we get some sort of interaction between Warner and The Situation?

Eagles cornerback Asante Samuel delivered the hit of the weekend in Kansas City. After catching a pass in the flat, Chiefs rookie receiver Dexter McCluster got smoked by Samuel, who proceeded to pose for the crowd after the thunderous hit. He doesn’t hit like that often. Thus, I […] 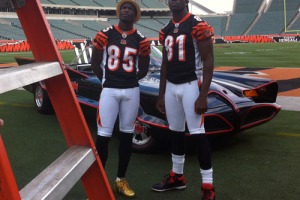 Ochocinco and T.O. Greet the Batmobile

While getting ready for the 2010 season is a priority for Chad Ochocinco and Terrell Owens, hamming up this whole Batman/Robin angle is important to them as well. This photo is courtesy of the Cincinnati Enquirer. Seriously, 8-8 has never looked this impressive.

Video of the Day: Jets Rookie Gets Hazed

Last night on HBO’s Hard Knocks, rookie Jets defensive back Brian Jackson drew the ire of secondary coach Dennis Thurman and eventually his teammates. They responded to the rook with some good-old fashioned hazing. At one point, it looks like he got hit with a mix of Gatorade, […]

Video of the Day: Ryan Howard Loses His Everloving Mind

Ryan Howard was ejected from last night/this morning’s 16-inning marathon loss to the Houston Astros after third base umpire Scott Barry ejected him from the game. Regardless of whether Howard’s reaction was a bit over the top (which it probably was), Major League Baseball umpires love to bully […]

I’ve made a last minute decision to live blog while my flight is delayed. I need preseason too…not just Minnesota’s relatively unknown QB. 8:14pm- I feel like I should preface every sentence by saying “I know it’s just preseason but…” Anyhow, San Fran’s opening drive went smashing well. […]