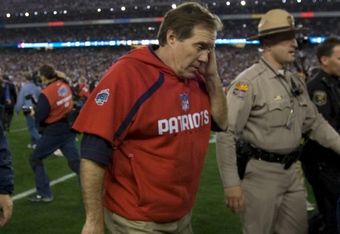 One of the enduring images from New England’s historic Super Bowl XLII loss to the Giants four years ago was Bill Belichick’s red hoodie sweatshirt.

According to Belichick’s lady friend, Linda Holliday, the red sweatshirt of doom will not make a return engagement when the Giants and Patriots lock up at Super Bowl XLVI.

Reportedly, Belichick is going with his usual blue or gray hoodie, which is mandatory in this situation.

The babyface version of Hulk Hogan would never wear anything at Wrestlemania other than his traditional yellow tights with red kneepads and yellow boots.

Belichick is no different. Keep the standard.